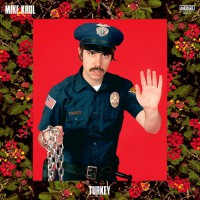 Can I just express a quick note of appreciation for Merge Records? I mean, they started with a solid early catalogue that bloomed into an indie rock powerhouse who eventually snagged and Album of the Year Grammy. They could easily focus their efforts on finding new celebratory festival ready acts, but instead they release records like Titus Andronicus' ambitious rock opera and niche guitarist William Tyler's last couple of albums (They also just reissued Seaweed's Action and Indications, which deserves a special mention). It's an encouraging sign that the label hasn't disappeared up their own colon pathway and that they are still dedicated to releasing music they're passionate about. And here we are with yet another record that only inspires goodwill in the Merge Records team: Mike Krol's Turkey.

That is not a slight against him, however. Krol touches on digestible and relatable topics like heartbreak, not fitting into your music scene, and worrying about your dad. He pours his scattered thoughts out on top of thick, scuzzy guitar pop. Mike Krol's songs don't last very long, but I get the impression that he can sneer for hours at a time. His nasal, scoffing tone carries the songs to a gray area between outright catchy and playfully snotty. The lyrics to "Neighborhood Watch" lays out a pretty low stakes scenario that Krol treats with a deadly serious and intense delivery. "Save the Date" has a sticky sentimentality to its use of paino that still works despite itself. "La La La," however, plays into his Krol's more grating aspects, with a chorus that will have you reaching for the volume control for the wrong reasons.

After tracks like "This is the News" and "Cactuses," it's easy to hope that Krol has more bombastic energy up his sleeve. But this leads to the Turkey's biggest weak point: its running time. At a scant 19 minutes, Turkey bows out too early. Krol displayed his ability to flesh out his sound without over stretching himself, so it's disappointing he didn't use that ability to create a longer album. Then again, it's hard to fault an album too much for leaving you wanting more.

I could end this review with a cheesy line like "This Turkey's got tasty meat!" or "Turkey isn't for the birds" or make some sort of bowling reference, but really, I just want to tell you to check this album out.