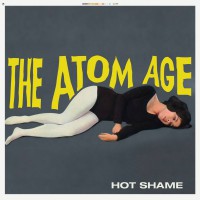 Oakland, Californiaâ€™s The Atom Age are back at it again! For their third album the band enlisted The Dwarvesâ€™ Blag Dahlia to co-produce this â€˜50s bop, surf, â€˜60s garage rock, proto-punk, and psychedelic sounding album. And they decided to title this ten-track genre conglomeration Hot Shame.

For those of you who may not know The Atom Age, they are often compared to Rocket From the Crypt. They are an aggressive, high-energy, five-piece rock band whose songs are filled with screaming saxphone sections that mash with thick, distorted guitar riffs.

If you listened to their last album, The Hottest Thing Thatâ€™s Cool, youâ€™ll hear that the saxophone carries more of the songs, but on Hot Shame the guitars carry the majority of the songs while the saxophone has been set back a bit this time around. The track â€œItâ€™s A Messâ€ is a perfect example of this change. It is mostly based on surf guitar riffs and 60â€™s style keyboard fills, while the horn section is there add some extra emphasis and character to the instrumentation.

The track â€œBarracuda,â€ though is a pretty killer tune, you get a lot of the same musical aspects as â€œItâ€™s A Messâ€ and others like the title track and â€œHear Them Scream,â€ like the jangly surf guitar sounds and psychedelic keyboards. However The Atom Age really go full throttle on this song. Not only are the bass and guitar hooks extremely catchy, but also once the chorus kicks in, the leader singerâ€™s voice transitions into this throaty, melodic yell. Itâ€™s something you might even hear on a hardcore record. The band show have done more of this kind of singing on this record because the mixture of his harsh vocals and the rest of the band work so well together on this track.

Hot Shame is definitely step up from the bandâ€™s last album. The Atom Age brought even more energy to this project than the last. That being said, in many ways this new release is still much like the previous one. The band went in a slightly different direction, but donâ€™t expect to hear a lot of drastic changes with Hot Shame. The Atom Age clearly have their unique style and they seem content with sticking to it for the most part, but at times that strategy backfires because some of the later tracks blur together and arenâ€™t that distinguishable from one another. There are however, a hand full of solid jams on this record. If you like that big band, Rocket From The Crypt style then chances are youâ€™ll dig this album.