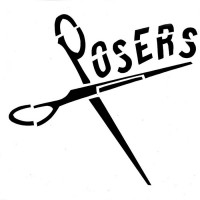 Posers are an up-and-coming young band from Philadelphia. After establishing a reputation as a killer live act, theyâ€™ve released their debut, self-titled EP. Right off the bat, the band is clear with their intentions. This is high energy, pulsating punk rock informed by the first and second wave of UK groups with a little of the US early west coast thrown in for good measure.

On â€œNothing,â€ the band strikes out seemingly at both the upper class and too-cool-for-school punk rockers. Itâ€™s very much a class warfare track that youâ€™d see in the early Chelsea seen, but instead of coming across as a dull political treatise, itâ€™s more of a idle finger to jerks. The strategy is short, snap, fun and refreshing. This is a band that strikes out more from the gut than the brain and itâ€™s surprisingly honest and genuine (despite the bandâ€™s name!)

Just like the Sex Pistols toyed with the concept of abortion on â€œbodiesâ€ (and remained masterfully oblique), Posers have a song called â€œCoppin in Camdenâ€ which explains, in explicit detail, how to buy heroin in Camden, New Jersey. The band isnâ€™t saying heroin is cool- but the upbeat, almost Generation X texture isnâ€™t poo-pooing the idea either. Itâ€™s a celebratory song about scoring smack. Is this like the Dwarves wryly wrinkling their nose at junkies on â€œDrug Storeâ€ from the junkyâ€™s perspective, or is it a bunch of kids being a little too wild? Mystery like that is what a a lot of contemporary bands could learn from as opposed to current pulpit sermonizing so popular in the scene right now.

It helps that frontwoman Jade Anna has such powerful pipes. In the vein of Penelope Houston and Jennifer Miro, Jade has a distinctive, song bird voice that fluctuates between a sort of cooing and ragged snarl. This is the kind of true talent that separates good bands from great. That is to say, there is genuine feeling in her voice as opposed to a particular template used to emulate a feeling.

The releaseâ€™s closing track, â€œWe are Posers,â€ really sums the group up and functions as their true opening salvo. As multi-part, compact punk epic, the song morphs from melancholy ballad to pulsating punk smasher. If this was release din 1978, no doubt the 7-inch would be fetching hundreds of dollars on eBay. But, itâ€™s not fair to continually compare this band to the first and second wave legends. No doubt, they are influenced in both sound and style by bands like The Adverts, Avengers, and Su Catwoman (see Jade Annaâ€™s ever changing hairdo), this isnâ€™t straight up mimickry. Rather, you could say itâ€™s a buffering of a certain sent of o.g. punk values used then to create contemporary, exciting music. The ghosts of, say Jennifer Miro and Poly Styrene, are here, but this is very much a living band that is growingâ€¦ and theyâ€™re growing towards something exciting. There have been rumors of the band moving from Philly to Portland (Portlandâ€¦ why? Ughâ€¦.) If they do, itâ€™s Phillyâ€™s loss. Donâ€™t Go, Posers, donâ€™t go.