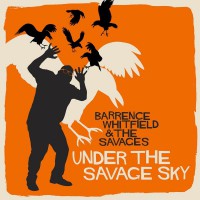 Barrence Whitfield and the Savages

On Under the Savage Sky Barrence Whitfield and the Savages provide more of the garage rock-influenced soul we've come to expect from them over the past 30 years. The album definitely leans heavy on the soul aspect, as lead vocalist Barrence Whitfield plays the role of soul shouter channeled through Jimi Hendrix. While the band, made up of two former members of The Lyres, provides garage rock that actually sounds like it's from the Jac Holzman and Lenny Kaye Nuggets compilation as opposed to made by a bunch of kids who grew up listening to Nirvana and The Velvet Underground. Which is a welcome change of pace, as far too many bands that were tossed under the umbrella of â€œgarage rockâ€ in the past decade have really not fit the mold set by bands like The Standells or 13th Floor Elevators.

The truly interesting thing about this band is they're still doing the same thing they did as well as they did it 30 years ago. Which isn't hard to imagine, while the band pulls off classic garage rock with horns, saxes and great riffs. The genre isn't one that remains in flux, that is to say a band like Radiohead have the expectation to move their sound, if not their entire genre, forward when they put out a new album. That expectation does not exist when you're band makes soulful garage rock that is rough around the edges. The double-edged sword that comes with this, is sounding formulated or tired in doing so. Essentially, just because something doesn't sound bad, doesn't mean it doesn't sound like a group of bored musicians phoning it in for a paycheck. The band succeeds in avoiding this by keeping the energy high and the vocals passionate.

On an album made up of both originals and a fair number of covers, the band rarely falls short of drawing you interest in for the duration of the track. The best originals on the album include â€œIncarceration Casserole,â€ â€œBad News Perfumeâ€ and â€œI'm a Good Man.â€ The covers were a bit harder to judge, as the band selected songs that they were most influenced by, which makes comparing them to the originals a bit easier. The band tends to succeed more than it fails, it does this by not betraying the original but also by not letting the original composer and performers do all the work for them, they add a touch of personal flair as frequently as possible. Among the best is a great cover of Timmy Willis's â€œI'm a Full Grown Manâ€ which has a great Hammond B3 organ in it.

My biggest fault for this album, has little to do with the actual music on it. But, rather the branding of its sound as punk-soul. While I have always taken a fairly open door policy on what punk rock can entail, I had a hard time imagining any punk band I've ever heard, except maybe The Jam, blending well with the sounds of Wilson Pickett, Otis Redding or Al Green. There's just too much variance between the genres. Don't get me wrong, this is a great album. From start to finish if you want to listen to great garage rock that owes a heavy debt to Little Richard, this is your best choice so far this year. But, I went into it expecting to hear something completely different than I ended up with. Luckily, it was a good surprise, and as the album went on it became a welcome one.

Pleasure Leftists: The Woods of Heaven