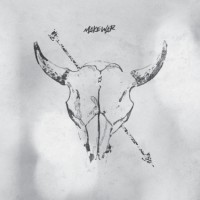 Make War's roots lie in Brooklyn with singer/guitarist Jose Prieto, bassist Edwin Santacruz, and drummer Greg Taylor deciding to take their acoustic act, Sad and French, up an electric notch, playing louder and faster punk rock. What they ended up doing is forming something, not as aggressive, but more to the mid-tempo end of the spectrum, with a sound that early on comes off like label-mates, Choke Up. Not as rough or pissed off but more restless. However, as this self-titled progresses, it gleams similar to bands like Restorations and The Gaslight Anthem. It does feel a bit inconsistent at times, but I won't say it's lacking uniformity or direction. There's a fluidity to Make War even though it feels like a tale of two halves. I mean, the name change does say a lot about their musical style now, after all.

There's a nice empowering feel to Prieto's punk disposition early on. He's grainy and hoarse as they ramp up "Just Listen To The Songs" and "Against The Rules". Energetic and anthemic, making you wonder what inspired that change from Sad and French, which wasn't a bad act at all. However, they quickly resume old philosophies on tracks like the folk-punk "Second Floor" and "When The Poison Flows" -- which have that acoustic foundation to them. Same for "Another Way To Let You Go" which feels like a heartdrawn ballad plugged into the amp out of frustration. Maybe they felt it better to have an easier, gradual shift into Make War? That aside, this three-piece continues to tell personal and connective stories about NYC. They sing about tragedies and feel much more open from their droopy past. The lyrics feel packed with more life and I can see them quickly gaining comparison to Nightmares For A Week and Blacklist Royals after this debut. There's room for improvement but they're on the right path with these tracks.