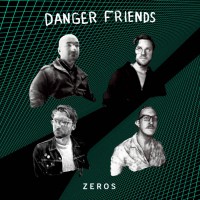 Danger Friends are the perfect kind of punk band in that they don't give two shits about what punk is "supposed" to be or what it has become. On their Kung Fu Records debut, Zeros, which follows a string of digital releases, the band arrives fully formed and wonderfully discordant.

The band makes their trade is heavily distorted, synth punk. Across the EP, the band is constantly pushing their synths and ovals into the red, smushing their sound together so that it often comes out as a burning ball of static. Too often, in synth punk, the temptation is to a leash on the electronics, but not so here. The band flies all over the board in a shambolic mess. Garage rockers are usually given the gold metal for wonderfully sloppy performances, but here, the band can't seem bothered to worry about perfection and instead go for raw synth-combustibility. This is what makes them special.

Throughout the release, the band employs a sort of cat and mouse game. On early tracks, they go for a pure-sludge attack, making as loud of a racket as they can, trying to level the place through cacophony and energy. But then, deftly, they suddenly switch their game up mid-way and reveal that the band knows how tow rite a hook and really, that most of their songs have hooks- they just like to cover them with electronic chaos. This gleeful nihilism seems to be what drives the band, as evidenced by the releases title. A zero can be a thing of no worth, but it can also be a thing that has no true definition- how can you truly explain the "Absence" of anything? There is pure chaos in this release as well as solid song writing- through the band leans towards the former. Surely, that explains the band's inherent ethos.

The Screamers, Gary Numan, and The Normal would all be proud. Highly recommended.