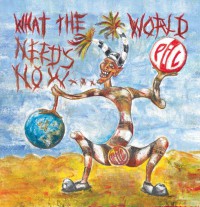 It's an era of seemingly endless reunions, as long-dead bands are rising from the grave, whether to headline festivals for a quick payday or set off on one last tour to feel young again. Sometimes, these reunited outfits will even crank out new records, though more often than not, they crash and burn in a desperate attempt to recapture former glories. That's precisely what's made the return of Public Image Ltd. so refreshing. When the band released their return effort, This Is PiL in 2012, critics and audiences could be forgiven for being cynical about PiL ringleader John Lydon's motives, but after a single listen it became clear this was not a cash grab, but rather a passionate musical expression of the creative energy Lydon had bottled up since the band's last proper full-length in 1992. Say what you will about the man, but his band is clearly not here to take the money and run.

Take the lead single from the record, titled "Double Trouble." As mentioned in recent interviews, this song's lyrics focus on Lydon's troubles repairing a toilet in his home, and the resulting conflict with his wife over calling a plumber. While the subject matter lacks the resonance of earlier PIL works like "Public Image" or "Religion," the song rocks, much more so than any on This Is PiL. It's frenetic, repeating guitar line in many ways makes "Double Trouble" one of most traditionally "punk rock" songs Lydon has penned since PiL's formative days. It's not the only rocker on the album, either. Second track "Know Now" keeps the energy level up, and even as the record move into slower, more expansive territory, as it does on the six-minute-plus "C'Est La Vie," the energy remains apparent.

While this record certainly branches off in different directions, it does so in ways vastly different from the band's previous attempts at such. Most notably, the band doesn't overcomplicate things, relying on the guitar/bass/drums approach of the last album and early PIL releases, as opposed to the more bloated arrangements common to the band in the later '80s and early '90s. This is clearly experimentation based more on raw creativity and energy than on a deliberate desire to experiment, and the album is better for it.

What The World Needs Now builds on This Is PiL in just about every way, taking the band in new directions while remaining rooted in the sound that PiL invented so long ago. For those who thought the band's 2012 return album was a one-shot burst, you're dead wrong, and you're lucky you are.

The Wonder Years: No Closer To Heaven