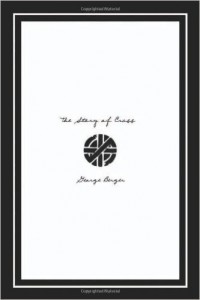 The Story of Crass is George Berger's biography of one of the first anarcho-punk bands, Crass. Formed by Steve Ignorant and Penny Rimbaud in the late 70's, Crass functioned as an anarchist collective operating from a commune in the English countryside known as Dial House. The band released six full length albums varying widely in style but consistently featuring an intense and trenchant take on politics, art, gender, and music. Fiercely independent, Crass were among the first bands to self release their records, eschew advertising, and function almost entirely autonomous of the traditional music industry system. Berger writes clearly and directly, and paints an honest portrait of one of punk's pioneering groups.

One of the best parts about the book is the very beginning. Berger goes far into Penny Rimbaud's history, tracing his childhood and education at art school to his first interest in politics into his first experiments with improvised music and later punk music. Berger does the same with other members of the band, mostly Gee Vaucher, but Steve Ignorant and Eve Libertine are included to a somewhat lesser extent.

The book features in depth interviews with members of the band, although at times it seems to focus more on Ignorant and Rimbaud than it does on the rest of the band. But to Berger's credit, the interviews are extremely well conducted and give a lot of information not easily found on the internet or in the liner notes of the "Crassical Collection" re-releases. A good majority of the book is very well researched and is written from the perspective of someone who lived through a lot of the story with the band. The first hand accounts of certain events (like the Stonehenge festivals) can be nice but there are times that the book seems to devolve into Berger trying to relive his glory days coming up in the punk scene, falling into personal anecdotes about various shows or protests or squats that have little if anything to do with the topic at hand.

At times the insight into the Crass' actual music is lacking. The book sometimes feels like, "Here's a lot of wild stuff that went down and then they put out Penis Envy! Now hereâ€™s some more stuff that happened." The political and personal lives of the band are just as valid as the rest, but it would've been great to have a real document exploring the musical process behind the albums. And for that matter, at times Berger seems inappropriately critical of Crass. A good writer can report from a critical position but Berger is often too heavy handed about it. "Christ - The Album" is given far more attention than any other album in the book and is preceded by him telling us that this is his favorite album and he thinks they should've stopped afterwards. Subsequently, "Yes Sir I Will" and "Ten Notes On A Summer's Day" get very little attention and are treated more as footnotes than proper releases. Sometimes you have to wonder how much Berger actually likes Crass. On well more than one occasion he tells the reader that he much preferred Poison Girls to Crass - leading us to ask, â€œ Then why aren't you writing about Poison Girls?â€

The Story of Crass also seems to fall into a trap many other music biographies are familiar with. Clearly written chronologically, the beginning of the book is meticulously researched and well structured. But as the book continues the chapters get shorter and less informed (reminding me of the lackluster Fugazi chapter in Our Band Could Be Your Life), perhaps in part to the author's oft-admitted contempt for the last two Crass albums.


Berger sometimes assumes a little too much knowledge on the part of the reader. He discusses the musical content very little, operating under the belief that the reader knows each record as intimately as he does. And he entirely forgets to explain until the end of the book why Crass records were inscribed with the "_21984" depending on the year of release, despite referencing it throughout its entirety.
But for all the books shortcomings, Berger does a fantastic job of placing the band in the proper musical, social, and political contexts, a feat most other punk histories frankly fall more than flat on. In The Story of Crass, Berger intricately discusses the aftermath of World War II and its influence on the beginning of punk rock, and the later effects of Margaret Thatcherâ€™s rule and her war in the Falklands and how it all relates to the contemporary music scene as a whole as well as Crass.

Although the book is very well researched and gives a lot of insight into one of punk's most mysterious and misunderstood groups, it also has it's fair share of shortcomings. However, it does come highly recommended for anyone interested in the history of anarcho-punk music or punk music as a whole, but it should be supplemented with a book like The Day The Country Died or the essays in the Crassical Collection reissues.