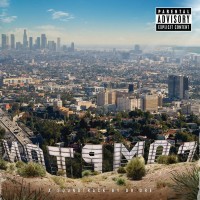 If anything, Dr. Dre is a master tactician. For years, he was chained to the promise of Detox, an album delayed by decades which, with all the hype around it, could never live up to its rumored existence. When do long awaited albums ever achieve what is expected of them? (Amirite Guns N Roses?) So, instead, Dre simply says he canned the entire album and in flurry of creative energy, the usually modulated Dre blasted out a new album that would serve as his third and final long player. Hell, for all we know, Compton could be Detox minus the previously leaked tracks.

Clearly, Compton demonstrates Dreâ€™s dedication to mastercraft. Here, every single beat, every single note, is positioned with care in a way that is so mechanical, one is almost reminded of Kraftwerk. Dreâ€™s mid-tempo rhythms roll and wind through their running time with a craft so on the mark, it's impressive at how practiced and measured the famed producer is.

Likewise, there is a true dedication to sound here. The beats themselves sound fantastic. Compton is marketed as a soundtrack and this release sounds cinematic. Mega-hi-fidelity is the rule of the day and the album is so crisp and lush that, at times, it almost feels like itâ€™s supposed to be an advertisement for beats headphones. Though, in this worship of sonics itself, Dre loses one of the things that made him special in the first place. Nearly the entire album is based off huge, dolby-style songs, but none of the beats really catch hold of the ear. â€œItâ€™s all on meâ€ has moments where it lovingly salutes the melancholy, wondering soul of Marvin Gaye and Bill Withers. Yet, Dre never focuses on any movement enough to give most of the songs a unique character. â€œItâ€™s all no meâ€ is HUGE, but all the songs are huge and they all have the same sort of unwavering, ocean size character.

This is underscored by the fact that when Dre does forget about trying to make a song full of import that a sort of true character, and paradoxically a true sort of sentimentality, shines through. â€œGenocide,â€ after riding a menacing dropping beat, suddenly flexes into an homage to 20â€™s big band music, but despite the cheery face, is about people getting wasted. â€œAll in a Days Workâ€ which flows from a sort of Stevie Wonder soundscape to a 2am jazz solo, introduces a new trick for Dre and a perhaps am entirely new method for Hip Hop in general. Songs change their entire character from start to finish gradually changing their shape into something entirely new. The fact is, with the rise of pro-tools, a lot of producers have gotten lazy, establishing a five second theme and then running that theme into the ground through unwavering reputation (Dre included). Here, songs are constantly evolving, resulting in the massive scale that seems to be Dreâ€™s goal for the release.

It is disappointing that the main man himself is a guest star on his own album. Call it personal bias, but to me, the reason a Dr. Dre solo album is a Dr. Dre solo album is because he raps as well as produces. Here, Dre has multiple guest stars on every track, doesnâ€™t even appear on one (â€œone shot one killâ€), and often appears for just a few seconds. To be fair, he does produce every track, though he doesnâ€™t even actually create a good amount of the beats themselves- though, this may be what makes Dre a true producer, along the lines of Phil Spector, Lee Perry, or Quncy Jones. Dre produces, he doesnâ€™t compose, and he is a master of the skill.

Still, for years, one was waiting for Dre to put his personality in the spotlight. Even though itâ€™s an open secret that Dre uses ghotwriters, his inherent charisma, or at least style, shines through giving his songs a geuniness. Yet here, Dre shows up, says something quick, and leaves, almost as if he doesnâ€™t want to be on the album. Bizarrely, unlike his meticulous care for the texture of the beats themselves, Dre mixes his voice in a way that his slight grain and inherent gravitas is washed out entirely, leaving only the mid-range and a rather bland actual sound at that. He uses this style for all the 19 vocalists that show up (save two), resulting in an album that merges all of these diverse vocal tics towards as single, kind-of-generic voice. Where both The Chronic and 2001 reveled in, and appreciated, the different character of voices themselves, here they are all pushed into the same limiting box. And itâ€™s tough for the acts that do show up- and honestly, not all of them really seem to go all out. With about 45 seconds per slot, it can be hard to introduce oneself and say something profound or complex, so most of the artists here show up, say how dangerous Compton is, say how dangerous they are, and some say that they are rich. That's about it. Frankly, itâ€™s been done before.

King Mez has been hailed for his contributions, and perhaps itâ€™s a failing on my part, but to me, his contributions seem lazy and unoriginal: â€œ I donâ€™t give a fuck/off the top I wish a nigga would try a nigga/real shit, yâ€™all counterfeit/ yâ€™all niggas bad business.â€ How is this anything but the basest, written in 30 seconds, rhyme? And how is this the rhyme that opens the album? If itâ€™s meant to be a sort of avant-garde style, or a jolting, non-music opening announcement, it doesnâ€™t play that way and frankly, everyone involved could have done so much more. This style reoccurs by most of the acts throughout the album. In fact, aside from the beloved Kendrick Lamar, the oldies are the ones that shine through with the most individually.

Snoop Dogg, on â€œOne Shot One Killâ€ is one of the few emcess that raps along with the beat, instead of simply over top, and drops his best tune in years. So many emcees here use the beat as an arbitrary chasis to carry their words whereas Snoop Dogg weaves his voice through the hard funk/proto-heavy metal beat, creating an album highpoint. Even here, Snoop Dogg doesnâ€™t say anything profound, but he carries himself by exhibiting a unique style, along with an A-game performance, leaving most of the other blander appearances in the dust, even despite the songâ€™s awkward refrain, â€œYou are now not in the presence of nice guys.â€

Unfortunately, Ice Cube is misued. Give Oâ€™Shea Jackson a badass beat and heâ€™s the most dangerous emcee in the business. Here, he gets a skittering, zapping beat and pounding his baritone doesnâ€™t develop. Cube needs a track to pick up steam so that by the time he reaches the end of 16 bars, his last few words feel like sledge hammers. Insteads, heâ€™s forced to double time rap and engage in a modern stop and start style, which leaves an unmemorable performance. Troublingly, neither Ice Cube or Snoop have songwriting credits on their tracks- did Dre force them to use ghostwriters, too?

Despite its vocal flaws, if anything, there is a great amount of care in Compton. You donâ€™t have the multiple, shifting parts of songs like â€œFor the love of moneyâ€ unless you are deeply trying to make something new. Dre does turn in a challenging, interesting creation while staying true to his inherent character. Compton will never be the banger that its predecessor were, and itâ€™s doubtful that Dre even intended it as much. This is more Curtis Mayfield than Rick James, if you will. For a final statement, Compton works. It is as unique as its two brothers, and thankfully, doesnâ€™t showcase a middle aged man trying to be young again. One wishes the lyricists would have brought the craft of their producer, but in a way, Dreâ€™s actual production ends up looking all the better because of those shortcomings. Hmmmmâ€¦. the master tactician at work once again?