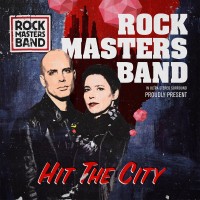 Finland five-piece the Rock Masters Band describe themselves as a â€œsupergroup.â€ This might seem a little grandiose, but then the Rock Masters are nothing if not self-assured. Forming from the ashes of popular Finnish bands Species and Spiha, this Helsinki outfit make fuzzy, thudding blues-rock in the vein of Royal Blood, The Black Keys and Queens Of The Stone Age, showcased in all its glory in new double single Hit The City / Diamonds.

â€œHit The Cityâ€ is very much a song to cruise to, preferably down a long, straight desert road with the window open. Soaring guitars and snarling vocals sit atop solid drums, cocksure, melodic bass and the ever-present chk-a-chk of percussion. Thereâ€™s nothing particularly revolutionary in the Mastersâ€™ sound, but itâ€™s confident, rock-steady and accomplished, paying homage to the heroes of frontman Sami â€œHaxuâ€ Hakala, bands like AC/DC, Aerosmith, Led Zeppelin and MÃ¶tley CrÃ¼e.

â€œDiamondsâ€ lurches in a different direction altogether, dragging aspects of Metallica and Muse into the fold. Unlike its predecessor, the song attempts - and succeeds at - some unexpected chord structures and tempo switches, keeping you guessing right until the end. Hakalaâ€™s given the opportunity to undertake a few vocal acrobatics too, which he pulls off with aplomb.

Fans of this breed of indie rock will find plenty to keep their head nodding in the Rock Mastersâ€™ soundscape, but will the influence of the self-proclaimed supergroup extend beyond their native Finland? Only time will tell.

Tsunamibots: Rise of the Robots [EP]