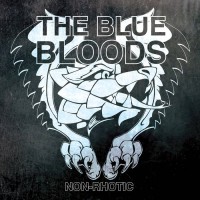 The Blues Bloods are from Boston and have been around in one form or another since 1998. There's not a ton of information available about them, but Non-Rhotic appears to be their third full length. They have also released albums for hardcore mainstays GMM and I Scream Records. Their bio on the East Grand website describes them as a supergroup comprised of A-listers from Boston's C-list hardcore punk set. Their music essentially toes the line between melodic punk and hardcore, and does it very well. As a matter of fact, The Blue Bloods seem far too good to be so unknown outside of their hometown. In an alternate universe, this band would be a household name in punk circles. They take the classic Boston HC sound (Gang Green, The Freeze, FU's) and add a modern metallic element. Singer and founding member Tim Baxter's voice often sounds really similar to Dicky Barret from The Mighty Mighty Bosstones. Imagine an angry Barret singing for Slapshot and you've got a pretty good idea what this sounds like.

The Blue Bloods' songs tend to be about the struggles and frustrations of the working man, and about dealing with idiots in general. Their songs are filled with the same type of people that inhabit Dennis Lehane novels. All of the fourteen tracks on Non-Rhotic are good, but "Click", "Better in Silence", "#5", "Mercenaries" and "Alligator Arms are standouts. Don't be surprised if you find yourself screaming along to "And you're a fucking drama queen" after a couple of listens to "If It Bleeds It Leads", arguably the album's best track.

Non-Rhotic (the word) is an adjective relating to or denoting a dialect of English in which the r is pronounced in prevocalic position only, common in Eastern New England and New York City. For example, "we drove the cah to the hahdcore show". The title is just one example of the album's abundance of self-deprecating humor. Closer, "She's Into Malakas, Dino", is the record's longest track. It's a 5 plus minute song about getting kneed in the nuts (the family jewels) and being embarrassed in front of your friends. It includes plenty of samples of people speaking less than elegant English. Non-Rhotic (the album) is a criminally overlooked LP that is worth the effort it takes to find it. The Blue Bloods have crafted an album of memorable songs filled with interesting characters.

Tsunamibots: Rise of the Robots [EP]