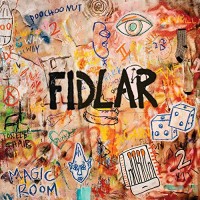 FIDLAR stumbled onto the scene a few years ago with their self-titled debut album, an unabashed celebration of getting drunk, snorting drugs, and throwing two sheets to the wind. It was energetic, if not teetering belligerently towards immaturity and braggadocio, with an attitude akin to listening to a sixteen-year-old boasting about getting drunk for the first time. 2015 finds FIDLAR that much older and in the throes of a nasty hangover. On their latest album Too, the drugs are plentiful, yet consequences have begun to rear their ugly heads. A welcome self-awareness that was not quite as apparent on their first album peeks through in Zac Carperâ€™s lyrics, who, following the relentless partying involved with the creation and touring of their first album, has since gone sober. Judging from his lyrics, itâ€™s probably for the best.

Though the Black Lips influence is not quite as prevalent in FIDLAR's make-up, it still rises to the surface in songs such as â€œWhy Generationâ€ and â€œHey Johnnyâ€. Touring with Wavves seems to have rubbed off on FIDLAR. The poppy moments on Too are extremely poppy, such as on â€œWest Coastâ€, one of the best songs on the record, and opener â€œ40 Oz. on Repeatâ€. One of the more divisive songs on the record is bound to be â€œSoberâ€, a track detailing Carperâ€™s struggles with sobriety, featuring a spoken-word verse that feels like a blend of The Networkâ€™s â€œSpikeâ€ and Suicidal Tendenciesâ€™ â€œInstitutionalizedâ€, highlighted by a hyperactive chorus and all kinds of spastic production tweaks. Itâ€™s interesting, though it borders on obnoxious.

FIDLAR do well to add contrast to the poppiness with a little mood music. â€œOverdoseâ€ is a sparse, morose track that sounds like something Tom Waits could have done, and stands in stark contrast to much of Tooâ€™s sugar-high energy. â€œStupid Decisionsâ€ slows things down for a solid low-tempo jam with a fantastic chorus. â€œDronesâ€ is one of the more rocking songs on the album, and also happens to be the track with the least bells and whistles production-wise.

One of the more immediately noticeable aspects of Too is its polish. A sheen of production twinkles across the record, heavily processed vocals and endlessly layered instrumentation lending a certain over-cleanliness of sound that not only belies the heavy themes at play, but feel a bit too clean for this style of music. A certain roughness around the edges might have done the songs some good -- as is, Too tends to slip dangerously close to the realm of syrupy pop record in the mainstream sense, rather than in the punk sense.

Album closer â€œBad Habitsâ€ sums up Carperâ€™s struggle with addiction, though the struggle feels far from over. â€Oh my god Iâ€™m turning out like my dad!â€ Carper screams, sounding none too happy with this revelation (and perhaps paying tribute to Green Dayâ€™s â€œThe Grouchâ€). I suppose we will have to wait for FIDLARâ€™s third album to see if he sticks the landing.