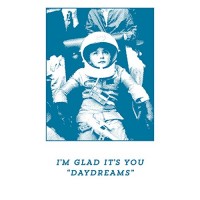 If Joyce Manor were the brother who fucks it up in college, then I'm Glad It's You would be the older brother listening and advising to move on and grow up. But still, the latter'd be the brother who relates and shares the same sentiments about those juvenile days. What they would have in common is a bouncy punk narrative, built through pop-rock and indie, that tell two different sets of stories but with a lot of similarity. Daydreams is full of promise and adopts a graver tone in terms of lyricism, layered over pop-punk bangers.

"Daydreams" opens up and is as angsty and yelpy as Joyce Manor's last record, Never Hungover Again. But the sense of familiarity comes in in terms of that serious approach (but still with a tinge of Cali rock) to the pop-punk genre. It's focused, slightly more aggressive and doesn't totally rely on simple chord structures. No shocker given Alex Estrada recorded as he's also worked with Joyce Manor. It helps that Bill Henderson's mastering adds some extra shine as the former Thursday guitarist continues to establish quite a rep for himself (note, I'm still in love with his Adventures work this year).

The four tracks are catchy, anthemic and bubbly with big hooks -- which make the re-worked track "Minor Acts of Cannibalism" pop a bit more. It starts off a la "Constant Headache" before doing its own thing, dictated on the sombre, shoegaze "June." As they cover Counting Crows ("A Long December"), they continue to show inventiveness in how they churn out melodies but sadly, the EP's too fucking short. In terms of how they mix their sound up, well it's neatly done and helps Daydreams grow as a great foundation for I'm Glad It's You moving forward.