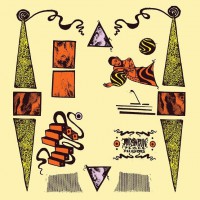 With a couple solid EP releases under their belt, Modern Pain face an issue that plagues many hardcore bands of their ilk. That issue, of course, is the hardship of releasing a full length album that maintains the intensity required for their sound. Smartly, the band expands it's sonic influence to include post-hardcore and noise rock dynamic shifts, pivoting back and forth over the course of Peace Delusions' 28 minute running time. With some smartly played studio tricks and elbow grease, Peace Delusions blasts by without outwearing its welcome. And, despite some hiccups, it never ceases to display a sense of raucous intensity.

Peace Delusions paints Modern Pain as an inverted version of Greys, another band who were able to wrestle themselves out of the aforementioned issue. While Greys leaned harder into their Amphetamine Reptile-esque noise rock rollicking than they did their hardcore influences, Modern Pain does the opposite. The band paint their hardcore with post-hardcore flourishes, but mostly stick closely to their forebears (Poison Idea is an obvious touchstone here). They're also aided by the hands and ears of increasingly eclectic producer Arthur Rizk, who seems to use the knowledge gained while working with Prurient to lend an engrossing atmosphere to this record. His recording of guitar pedal effects elevates tracks such as "Ego Death," which sounds like it was recorded in an old bunker located in the dead center of a windy tundra.

The vocals are fittingly snarled and unconstrained. At their most guttural and growling, they resemble Ceremony's Ross Farrar circa Violence, Violence. On "My Reality is Slipping Away," the vocals slip away into a watery haze as the song enters the quiet part of the classic loud, quiet, loud song structure. It can be effective, sure, but it also treats the vocals as a piece of the atmosphere (or, worse, a sound effect) rather than an integral part of the band. Vocal clarity is not common in hardcore, anyone can tell you that, but they're positively buried at times here. When the album reaches slower moments, there can be little to grab onto as a listener and that creates a frustrating experience. The band's musicianship rarely slips into the realm of simple meandering, but when it does, it's disheartening (especially once the novelty of the guitar pedals starts to wear off towards the end of the album).

A well produced hardcore album can become a boring novelty after a handful of listens. Luckily, Modern Pain are able to avoid that fate by crafting some solid songs that never get dislodged by various modes of studio trickery. Shorter songs like "4202" are as well put together as the longest song on the album, "Leave Me Here." Modern Pain seem like they are constantly Â itching to evolve their sound. So, hopefully they have a couple more tricks up their sleeves when they put together a follow up.Â

You can check the album out here.