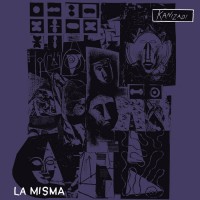 Let me start this off with a quick disclaimer: La Misma hail from New York, but their lyrics are 100% Portuguese. Despite knowing some Os Mutantes song titles and a handful of lyrics to "Aguas De Marco," I speak 0% Portuguese. Even though vocalist Nay Vieira-Rosario seems very impassioned when she delivers her words, I have no idea what she is saying. This is a shame since, judging by her incensed delivery, what she's shouting must be pretty vital. So, as far as the lyrical content is concerned, I will have to unfortunately plead complete ignorance. This reminds me of another (excellent) album released this year: Full Communism by Downtown Boys. That record, which shares this album's ragged and endearing looseness, alternated between English and Spanish lyrics. My relative ignorance of Spanish completely hindered me, leaving me feeling helpless among the no doubt deftly political messages getting defiantly spit out. I am not complaining, of course, since it's only their right to express themselves using a tool so close to their cultural identity.

Anyway, language barriers and my embarrassing lack of cultural awareness aside, the tracks here blur the line between post punk and hardcore. The guitars swiftly alternate between loose, icy, heavy, and churning. The music is as angular as the sharply etched purple and black print that makes up the album art. Kanizadi displays a sort of hardcore punk cubism: sonically recognizable, but the key parts are collapsed on themselves and rearranged. La Misma can slow things down to a calm and steady swirl, but they can turn it around into a hazy fervor as well. At certain moments, the band reach the maniac frenzy heights of label mates No, who released this year's great (and not to be slept on) mini LP Treating People Like They Don't Exist.

The main issue I have with the record is the mixing, which never really rises above demo tape quality. It seems as if the album was recorded by microphones at the other side of the room, with La Misma stretching their volume in an attempt to be heard. This quality would damage the record completely if it weren't for intense performances put forth by the band. Tracks like "Ta Rabida Sin Es Ta Bira L Na Bo" positively shake with illuminated energy.

I cannot confirm if the lyrics are of a personal or political nature. Maybe it's a little of both or I'm completely off base. All I can say for sure is that La Misma deliver a solid set of fun, slanted hardcore on Kanizadi.

Craig Finn: Faith in the Future