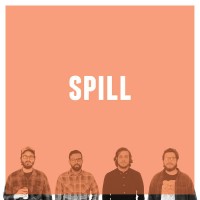 Being a fan of both We Were Skeletons and Placeholder, it's most welcome that they still get to live on in Spill. While it feels more like an evolution of the latter, Spill manage to be more vocal about their identity than I first assumed they would be. This isn't a vanity project or anything filler -- it's a five-tracker of raw, unadulterated passion fueled by the emotional conflict that both bands represented in the past. The indie rage of Placeholder and the post-hardcore noise of We Were Skeletons are channeled, not fully, but still in the right measure to give something that fans of Superchunk (and the like) could dig into. Bold and very let-loose.

I mentioned Superchunk but I'll also add Weezer into the mix when it comes to drawing parallels to the opening two songs. "Collections" is the one that stands out in particular as an ode to crunchy '80s/'90s indie rock bands. It's catchy and caked with a fuzzed-out punk essence that'll surely have kids screaming them at shows. The distortion and up-tempo energy doesn't let up with "Don't Wanna Know What I Know" following suit. I can see fans of The Replacements and Beach Slang loving what's on show here. Both are head-bobbing, foot-tapping jammers.

These form a great contrast to the slower burners on the EP, making them pop even more. The twangy musical spine coupled with the group vocals on "Sucks Either Way" dives right into one of these jams on "Pretend For Our Friends". It's more along the lines that Placeholder set out with its quiet-loud pattern but it's the shrill guitars and the manner in which Brandon Gepfer pushes his vocal cords to the limit that leaves you breathless at the finale. It's very emotional, raw and the perfect way to cap off things. It's also the ideal way to announce that they mean business. Spill traipses around several corners of the rock spectrum but after 15 minutes, what it does is definitely leave a lasting impression that'll completely disassociate you from their forebears. In a good way, of course. You can tell that the production needs to be sharper, that Spill are a work-in-progress but overall, this EP, while one that's too short, is still one that spills over as a very solid record.