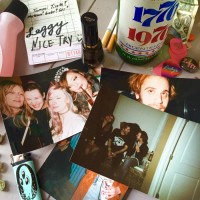 Around 2 o'clock in the morning, when you're coming home after a night at the bar, preferably one that held a show with a great lineup, you get back to your place exhausted, but don't quite want to let the party to end, resulting in putting on a pot of single origin, dark roast coffee. As your body fights between falling asleep and over-caffeination, you enter that weird anxious, sleepy zone that feels awkwardly good. Leggy is the embodiment of that dreamy, too-punk-to-go-to-bed sensation.

Nice Try is the follow up EP to 2014's Cavity Castle, doubling down on garage/indie punk, and adding drops of psychedelic rock to trip out your inner flowerchild. Leggy hits the ground running on "Peach," rolling in with rhythmic clapping to set an early pop sensibility. The clapping returns through several points of the song, but major shifts of tempo, extra distorted guitars, and cave-dwelling, echoed vocals give it a deeper bite. Leggy takes something lighthearted and fun, hypnotizes it, and throws it down a well of hallucinations.

After the fall, an early 70s themed, psychedelic rock, and 90s riot grrrl paradise appears in the shape of "Grrrls Like Us." The most impressive track in the six song collection, it's a lengthy two minutes, due to so many hills and valleys in such a short time. Drum and bass driven one moment, fuzzy guitars and organ the next. A fantastic vocal performance, hitting trembling high notes in the chorus, "There are plenty of fish in the sea, but girls like us don't grow on trees." Contender for song of the year.

"Adonis" is a lulling mythological land, spinning a story of seduction with simple, hip-hop patterned verses, and brief solos of sneaky grooving. Followed up by "A Reverie," Nice Try takes on a haunting tone. A dirtier, more punk tinged sound, helped by life escaping lyrics, making everything sound a little more defeated.

The EP finishes with "HHS 2" and "July," which channel the garage gods, using lots of faded, twangy hooks, crushing bass, and fun cymbal crashing. Just like that, you've been woken up. The psychedelic feeling wears off, and you're back to a more familiar reality. The change was so gradual throughout the 15 minutes, Leggy must be complimented in creating such a smooth transition from dizzying to sobering.

Nice Try is habit forming. More of it is needed. Now. It's diverse enough to keep things interesting, and familiar enough to make it clear what kind of sound Leggy is going for. They break up the typical garage rock and indie punk by bringing it to a dream like state, and give their music a pinch, to ensure a reality check. Bold, balanced, well rounded, goes down easily and satisfies. It's time for a refill.