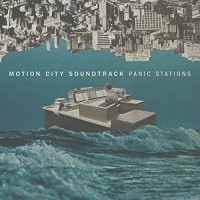 Motion City Soundtrackâ€™s longevity is quite impressive. Theyâ€™re kind of like if Weezer incorporated a synth and wrote pop driven rock songs with edginess. Like Weezer, MCS have done it all. Songs about rehab and relapsing, slow songs, fast songs, mind blowing songs, its almost a question of where a band can go from there. Panic Stations is the bandâ€™s most recent effort and its much unlike the bandâ€™s previous work with a generally darker theme whilst maintaining pop rock driven songs.

Similar to the bandâ€™s last album, Go, MCS has changed their sound quite a bit from their early days. They still have the typical synth leads on tracks like â€œTKOâ€ and â€œBroken Arrow.â€ But the album also draws more from the band. The songs are upbeat, yet they carry a gloom over each song as Justin Pierre sings lower at times than the vocal range weâ€™re used to, creating a cloud over otherwise driven pop songs. The effect works tremendously as it leads fans into a new side of Motion City Soundtrack. Itâ€™s almost as if Justin Pierre matched his lyrics to the feeling of the song, something the band seems to be famous for at this point but not at this capacity.

â€œHeavy Bootsâ€ is where the band return to form. The song is a catchy, poppy song that will have old fans rejoicing from the sound. One of the best thing about Panic Stations is that itâ€™s hard to pinpoint what album from the bandâ€™s catalog to compare it to. The album can certainly stand on its own but can be considered a blend between Even If It Kills Me and Go; two very different albums that incorporate the intense mixture of each albumâ€™s elements on Panic Stations.


The rest of the album flows nicely with a plethora of songs that vary in sound and theme. â€œDays Will Run Awayâ€ is the typical epic ending Motion City Soundtrack song but it also has a new twist to it. It still maintains the overall sound of the record but manages to incorporate everything a typical ending track released from the band. The song takes a surprising turn towards the bridge that will definitely grip fans attention one last time before the albums over.

Motion City Soundtrack has proven that they can continue to churn out great new music that is consistent yet transformable. The albumâ€™s theme and mood generate Panic Stations and the album does a great job maintaining that sound.