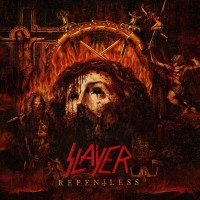 Itâ€™s not like you donâ€™t know whatâ€™s coming when Slayer hits your ears. Their reputation precedes them, being one of the progenitors of the â€œSatanic Panicâ€ in the late '80s, to influencing just about every thrash band in the current century. Slayer has brought their brand of darkness and evil (make that â€˜EVILâ€™) to metal for three decades. The passage of time hasnâ€™t taken its toll at all, with the unleashing of their twelfth LP (and first without founding guitarist Jeff Hanneman) Repentless.

The haunting â€œDelusions of Saviourâ€ is classic Slayer, reminiscent of the intro to 1985â€™s seminal Hell Awaits. Bringing about a dark, swirling atmosphere, it serves as the perfect into to the title track, a paean to founding member Hanneman. â€œI Hate the life / hate the fame / hate the fucking sceneâ€ guitarist Kerry King writes his in his fallen friendâ€™s voice, expressing his feelings towards the isolation of fame and his desire to maintain normalcy. More than two years after Hannemanâ€™s death, his presence is more than felt.

â€œTake Controlâ€ and â€œVicesâ€ serve a quick one-two punch, without the listener even noticing a change. The dirge of â€œVices,â€ particularly, is memorable, with drummer Paul Bostaph (Forbidden, Exodus) making his mark in his return to the band after an absence of over a decade.

â€œCast The First Stoneâ€ brings back the dark, evil tones early Slayer fans remember and crave. The haunting intro heralds a furious blast of fury that will make old and new fans bang their heads in approval. â€œWith blood you will paaaaaaayyyyy,â€ screams bassist/vocalist Tom Araya, and so will you. The solos near the end are vintage Slayer, and headbanging is mandatory. The fury of this song canâ€™t be denied, and itâ€™s one of the best that the band has produced in the past decade.

The haunting intro of â€œWhen the Stillness Comesâ€ follows, and itâ€™s darkness all over the listener. The songâ€™s intro evokes the band in its early incarnation, trading a more modern vocal-only delivery later on. The approach works, bringing darkness and fury together for an appropriately eerie result. â€œChasing Deathâ€ follows with all its measured fury, rising and falling with a calculated measure. The song moves into â€œImplode,â€ bringing a slow and dirty measure until it explodes in the bridge/chorus. The slow buildup and huge explosion live up to the songâ€™s title.

â€œAtrocity Vendorâ€ has a decidedly punkish feeling at the intro, flowing into a Slayer fury. Vocalist/Bassist Tom Araya sounds as strong as he ever has, his guttural growl absolutely tearing through the speakers. The old-school metal intro of â€œYou Against Youâ€ is deceptive, as it evolves into a maelstrom of guitar solo and drum fury, finally dragging the listener into its whirlwind. The album closer, â€œPride and Prejudice,â€ seals the thrash envelope with a kiss, ebbing and flowing like a classic thrash tune does.

Make no mistake, Repentless is the best Slayer album of the 21st century. Those that have dismissed the godfathers of thrash are mistaken; this is a band that, while long in the tooth, is as vital musically as ever before. Hail Slayer!