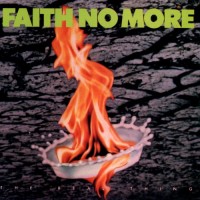 26 years after its original release, Faith No More's best selling album is finally getting the deluxe re-issue treatment. The Real Thing was the most rock and roll FNM record, and the first of only two with the classic line-up of Mike Patton (vocals), Jim Martin (guitar), Billy Gould (bass), Roddy Bottum (keyboards) and Mike Bordin (drums). The album would go on to sell more than four million copies. While this is impressive in any context, it's even more so when you consider the musical landscape of the time. The best selling rock albums of 1989 were by Bon Jovi, Poison, Def Leppard, KISS, Tesla, Cinderella, Skid Row, Ratt and Great White. Faith No More's music was not rooted in that (or any other) era, and has aged far more gracefully than that of their hairy contemporaries. This 2 CD or 2 LP set gives you a re-mastered, pristine sounding version of the original eleven track album, plus a second disc with eleven rarities.

"From Out of Nowhere" is a fitting name for the track that opened the album that propelled a relatively obscure band into the realm of MTV darlings and rock radio staples. Next up was "Epic", Faith No More's best known song. It seemed an unlikely hit with its big, funky bass line and rapped verses. It was the ultimate expression of sexual frustration. "You want it all but you can't have it/It's in your face but you can't grab it". The song lived up to its grandiose title with its sweeping guitar lines and majestic piano outro. "Surprise! You're Dead!" was FNM's most straight up metal song, with a wicked riff and of kilter rhythm. They followed that up with the mellow to spastic "Zombie Eaters", which still stands as one of the strangest songs ever written about raising children. "Hug me and kiss me/Wipe my butt and piss me".

The eight minute title track and "The Morning After" easily shift from moody and atmospheric to violent and abrasive. Lots of bands from that era used keyboards, but Faith No More fully integrated them into their sound. They were prominent in the hard-driving songs as well as the slower ones. "Woodpeckers From Mars" is an instrumental with enough different textures to stay interesting for nearly six minutes. FNM's cover of Black Sabbath's "War Pigs" is unusual only because it stays so true to the original. The Real Thing wraps up with the creepy pseudo-ballad "Edge of the World". It's a wonderfully twisted song about an age inappropriate relationship. The pacing of the record is flawless. There are enough changes in speed and intensity to hold the listener's attention for all 55 minutes.

The bonus disc has remixes of three songs from The Real Thing. The differences on these versions of "Epic", "From Out of Nowhere" and "Falling to Pieces" are subtle. There are also a handful of live tracks that mostly serve to remind us what a charismatic performer Mike Patton was. The most interesting live songs are "Chinese Arithmetic" and "As the Worm Turns", two songs originally recorded by previous singer Chuck Mosley. The big scores for fans are two obscure studio tracks, "Sweet Emotion" and "Cowboy Song". Despite their familiar names, they are original songs and not Aerosmith and Thin Lizzy covers. Overall, the bonus material paints a pretty good picture of where Faith No More was at during that era.

The packaging is pretty straight forward, and the cover art is a variation on the original. The liner notes include archival interviews with the band members (except Martin) about the making of the album. It's interesting to learn that the band was already recording the album when they hired Patton as singer, and he wrote all the lyrics and melodies in 12 days. There are also photo outtakes included, and it's shocking how young the band looks. One series of photos has FNM posing in their underwear, with the exception of Jim Martin, who's dressed in full heavy metal gear. It was an omen for things to come, as Martin would last only one more album with the band.

This record cast a big shadow. The success of The Real Thing would ensure FNM greater artistic freedom going forward. Their albums would only get weirder and less commercially viable over time. Their next LP Angel Dust is generally considered their masterpiece. Their combination of punk and funk and metal and lounge has not been matched to this day. Faith No More's excellent comeback album Sol Invictus and return to touring have created a renewed interest in the San Francisco band. They are probably appreciated more now than they were during their original run. If you're new to Faith No More, The Real Thing is the place to start. It's a perfect balance of rock sensibility and artistic endeavor.