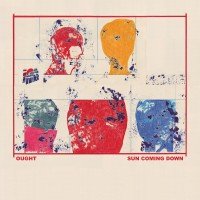 On their debut, Ought earned a hell of a lot of Talking Heads comparisons. Ever the silver-haired figurehead, David Byrne's musical specter looms large over the status of good-willed art rock. Sun Coming Down, the band's sophomore record, finds Ought lightly pushing the boundaries set up by their first record's reception. David Byrne is still a touchstone, yes, but they're branching out into other staples of art rock and post punk. "Men for Miles" and the almost title track "Sun's Coming Down" are lightly dipped in Dismemberment Plan-isms. The vocals on highlight "Beautiful Blue Sky" venture into swirling yelps and sternly timed vocal tics previously mastered by Mark E. Smith. Even at their most discordant and melody unconscious, the band can channel Henry Cow and avant rock bands of their ilk. One thing is for sure, Ought are still very much a product of their influences.

You may have noticed a glut of name dropping in that first paragraph. Well, that gets to the root of this band's main issue. What hurts Ought the most is that they rarely rise above the sum of their influences. "Celebration" rocks back and forth with Raincoats shagginess and Television flamboyancy, but it ultimately feels like empty posturing. They garner inspiration from good bands, but they fail to make the next step. Picking something up is only half the battle. You have to actually do something with it.

The band keeps their songs loose and nearly structureless, which makes for a good live experience, but leaves much to be desired on record. The tracks have a nasty habit of floundering, as if they can get by on pleasant affectations alone. "Beautiful Blue Sky" is one of the only songs that lingers after it's over. It sports a heavily endearing instrumental that interacts with the randomly winding vocal melody. Other tracks, like "The Combo" and "On the Line," rise above the rest on pure energy alone.

Lyrically, the band is still ruminating on the vibrancy of living and taking advantage of the day, even extolling the virtues of mundane life. That's all fine and dandy, but they've already devoted 40 minutes to that on their last record. And, a lot like their last record, this new one is another fine set of songs that are pleasant enough. It would just be better if there was something there to grasp onto.