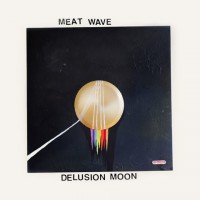 The cover art of Meat Waveâ€™s Delusion Moon is an homage/parody of Pink Floydâ€™s classic Dark Side of the Moon prism iconography -- a beam of light penetrates the spherical shape of a moon, but rather than color escaping in a vibrant rainbow, the beam ricochets about its core like a misfired bullet and drizzles from the orbâ€™s floor in multi-colored icicles. This imagery is where Meat Wave and Pink Floydâ€™s similarities end; the Wave play with a sneering viciousness those dope smoking English longhairs could never muster.

Meat Wave have snarled their way into hearts and minds across the Chicago punk rock scene in a relatively short period of time, sounding like a more melodic Hot Snakes cross-bred with the amped up vigor of the Marked Men, all while harboring the brooding attitude of Steve Albini-esque noise-punk. On their SideOneDummy debut, Meat Wave live up to the potential theyâ€™ve exhibited to this point, and deliver in Delusion Moon a memorably sinister heaping of punk rock.

Tension permeates the album, as essential to Meat Waveâ€™s sound as any instrument. Album opener â€œDelusion Moonâ€ is one long build-up, drummer Ryan Wizniak pounding on the drums methodically as Sutter hollers the albumâ€™s mantra, amping the intensity to a boiling point. Lesser bands would blast into a punk drum beat halfway through the song -- Meat Wave stick with this taut intensity to the songâ€™s end. â€I never meant to throw your computer out the window,â€ Chris Sutter sings on album stand-out â€œWitchcraftâ€, a notably perplexing and absurd line. A recurring theme of mental illness flows throughout Delusion Moon, painting in broad strokes the nature of madness. Meat Waveâ€™s ability to manipulate the listenerâ€™s blood pressure with the intensity of their music is only amplified by this theme. â€œSunlightâ€ (which appeared previously alongside â€œSham Kingâ€ on this yearâ€™s Brother EP) serves as not only the best song on the album, but as a prime example of Meat Waveâ€™s mastery of tension-building. It begins subdued, builds to a crescendo of crashing symbols, crackling guitars, and almost-but-not-quite shrill hollering, before slowly fizzling out in a grumble of bass. Its rise and fall plays out like a ride, and demands many a listen.

The latter half of the album is where some of the best tracks reside, including â€œErasedâ€ and the punch-in-the-face energy of â€œNRAâ€. A bouncy, mischievous bass line highlights closer â€œThe Gay Contemptâ€, and brings Delusion Moon to a satisfyingly haunting end. Much of the mood that Meat Wave conjures would possibly be stifling were it not for the pure energy brought to their musicianship. They keep their sound kinetic enough to counterbalance the heavy, and in turn inhabit a fresh sound entirely their own.

With Delusion Moon, Meat Wave have created a batch of punk rock songs both uniquely suspenseful and crawling with creepy energy. It is also one of the yearâ€™s most engaging punk rock albums.