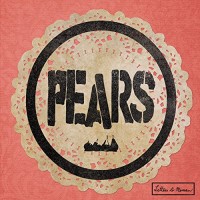 I think itâ€™s fair to say that PEARS took the punk scene by storm with their first full-length Go To Prison. The way the band was able to incorporate pop-punk melodies and aggressive hardcore was something that made them very unique. The fact that the album was recorded and produced in a completely DIY fashion made it all that more special. I wouldnâ€™t be surprised if it will be considered a classic hardcore album in the future. But here in the present, the band has exploded in popularity. Since Ryan Young exposed them to the world on his Anxious & Angry podcast a little over a year ago, they have been touring pretty much non stop and fittingly signed to Fat Wreck Chords. And now PEARS have released their first new material via Fat (aside from the labelâ€™s reissue of Go To Prison) that they have titled Letters To Memaw.

There are just two tracks on this EP, but they are two absolutely top-notch punk tunes. I didnâ€™t think they could top the songs on Go To Prisons, but somehow PEARS have taken their song writing to the next level with this EP. They have remained true to their original sound, but they have definitely pushed themselves to experiment a little and it has more than paid off immensely for them here.

On the A-side of Letters To Memaw is the song â€œSnowflake,â€ which you can also find on Fat Music Vol. 8: Going Nowhere Fat. â€œSnowflakeâ€ is definitely one of the bandâ€™s more pop-punk oriented songs, but it still has its hardcore leanings, which again is something the members PEARS are great at mixing together. Like I said in my review of Fat Music Vol. 8: Going Nowhere Fat, they incorporated the Ramones-core style, but added their signature abrupt stops and chord changes to it. Guitarist Brian Pretus shows off his speed with these chords changes, but more notably with his short fills, which is something that you donâ€™t hear too often on Go To Prison. Front man Zach Quinn shows us just how wide his vocal range is between his melodic singing and his throaty screaming. You can really hear just how hard he is pushing himself especially during the hardcore break down of this track.

While â€œSnowflakeâ€ is more on the poppy side of PEARSâ€™ musical spectrum the B-side track, â€œAnhedoniaâ€ is sort of the opposite. This song does have its melodic moments, but it leans more towards the hardcore ilk. Arguably itâ€™s their heaviest song, second to â€œGrimespree.â€ â€œAnhedoniaâ€ really hits its darkest point during the hardcore breakdown where the whole band slows down and Zachâ€™s voice transitions into this into this deep yell. This song also shows how the members of the band have improved as musicians especially when it comes to the angry back up vocals and the masterful drumming that constantly has to keep changing pace. And with lyrics like â€œThis fortress once erected, named, and scheduled for collapse/ With fading aptitudes and instincts and all memory left to pass/ I'll grip the hands of my companions with whom I'll perish in my cell/ Ancient fables of immortal sounding like a dying bellâ€ it is very apparent that they have become even better song writers.

At this point PEARS can do no wrong. They are on fire. It truly seems like Fat Wreck Chords is the perfect home for them at this point. Letters To Memaw is a fantastic follow up to Go To Prison and it is one of the best EPâ€™s to come out in 2015. If these new songs are any indication as to what their next full-length will sound like, I think it too will be one hell of an album. But for now letâ€™s enjoy Letters To Memaw.

Harvey Danger: Where Have All The Merrymakers Gone?