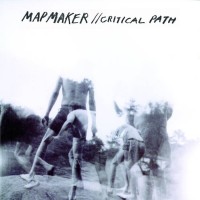 After a listen to Critical Path, itâ€™s hard not to compare Mapmaker to Chicagoâ€™s band of the moment, Typesetter. Both bands go for a similar sound: heavy, emotional punk--- not quite orgcore, not quite post-hardcore, but somewhere in between. Mapmakerâ€™s debut LP shows a capable, energetic band falling just short of perfection. Though itâ€™s not nearly a top album of its year, itâ€™s certainly an engaging introduction and a record thatâ€™s worth coming back to.

The music is relentless and tight, with plenty of intricate lead lines and heavy-hitting drums. These are the type of tunes that feel right at home at a packed basement show. The real win-or-lose factor lies in the vocals, always sung at top-of-your-lungs volume and recorded with that distorted effect heard on Japandroids records. The presentation is reminiscent of early Crime in Stereo; the vocals are not quite screamed, but not really sung either. It gives the songs a raw emotion, but also causes some of the weaker songs to bleed together. When the band hits it right, the songs are huge, energetic, and catchy.

A standout track is â€œBegs the Questionâ€, where Mapmaker slows down for a heavy and melodic song with only one full line of lyrics throughout its entirety. Another is â€œForgetting What Itâ€™s Likeâ€, one of the albumâ€™s less dour sounding songs. It succeeds in its more memorable chorus and easier to follow melodies. Some of the weaker songs (â€œStretched Thinâ€ and â€œCaregiverâ€) become a little indistinguishable, but they never lose the albumâ€™s momentum and are better with multiple listens.

If youâ€™re like me and youâ€™re a fan of everything from hardcore to pop punk, Critical Path will fall right into that sweet subsection of a million disparate genres. This band has the energy and brute emotive force of heavier music, while maintaining enough melody for the occasional sing-along. A brief online search reveals that Mapmakerâ€™s been pretty inactive lately, and thatâ€™s a shame. This album, though not without its faults, shows plenty of promise for a killer follow-up. Iâ€™d be willing to bet the band could get the formula just right with another go.

Harvey Danger: Where Have All The Merrymakers Gone?