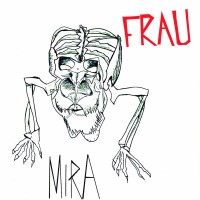 It wouldn't surprise me in the least if the members of Frau were intimately familiar with the first Desperate Bicycles single. The B-side of that release, "Handlebars," ends with the band's DIY ethos stated in the most straightforward way possible: "It was easy. It was cheap. Go do it." If Mira is any indication, Frau took this idea and decided to run with it. Recorded on the cheap, this brief EP sweeps by in a blur of screeching hiss and classic punk aggression.

At a scant five minutes, this is one of those releases you can listen to front to back before you can completely read a standard review. So, I'll keep this short. Anchored by solid bass lines, these songs find the band creating a frenzy of pent up wiriness that sounds like Kleenex/LiLLiPUT by way of early Die Kreuzen. There's a little bit of classic post-punk iciness here as well (this is an English band, after all). The vocals swing back and forth from urgent yelps to screaming aggression just as the instrumentals randomly switch from a scattered chug to a full stop. This unpredictability is key to the band's appeal at this juncture. The songwriting is loose, to say the least, and the band skates by on how abrupt the proceedings are. The songs barely hit your ears before they're over, not leaving much time to make an impression. The only exception is "EBD," Mira's longest song at a whopping 88 seconds. This sly, coy track has a shallow build that cannot be discerned until the song is nearly over. The track is in the same mold as the others, but it comes off much more assured and energetic. Let's hope Frau has more songs of this ilk in their arsenal.

You can check out the EP here.

Caffiends: No Gods No Decaf