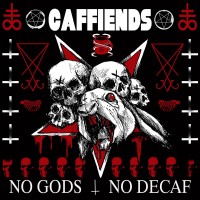 Points to Caffiends right away for the album title; itâ€™s always entertaining when bands poke fun at the uber-seriousness and self-righteousness of punk mentality. Itâ€™s a quick, obvious play on classic punk records that immediately exposes the bandâ€™s modus operandi: an adolescent sense of humor and a winking nod to those that have come before. Further points for audio clips from TV shows like "The Simpsons," "Kroll Show" and "South Park" (and even a Stone Cold Steve Austin quote!) interspersed throughout the album. Itâ€™s a trick that feels crass when itâ€™s used too much, but Caffiends do it sparingly, and it fits with the albumâ€™s attitude.

Aside from the brief vocal-less introduction, â€œAnthem for a Shittier Tomorrow,â€ most of No Gods No Decaf follows a similar format: two minutes or less of upbeat self-described â€œparty pop punk.â€ The musicâ€™s heavily indebted to the EpiFat style, primarily using skate punk tempos, familiar chord structures and simple, melodic lead guitar lines. The occasional horn lead is added for great effect. Brash, snotty vocals deliver lyrics about a succubus, drinking and nachos, though occasionally the band touches on the difficulties of being a partying, directionless punker (â€œHello Realityâ€). But the bandâ€™s outlook can best be summed up by the opening lyrics on â€œDillinger Four is a Gateway Drugâ€: â€œGotta wanna have fun/ I just wanna get drunk/ disappoint my loved ones.â€

Thereâ€™s not a lot of new ground paved on No Gods No Decaf, but itâ€™s clear thatâ€™s never been the intention of the band. Caffiends play funny and fun punk songs, often about stupid bullshit, and thatâ€™s refreshing. Sometimes itâ€™s nice to put a pause on serious introspection and railing against the state. Sometimes itâ€™s just fun to listen to a song about hangover farts.

Lucero: All a Man Should Do