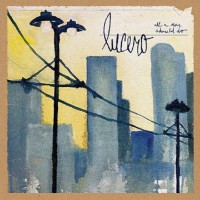 If 1372 Overton Park and Women & Work were the celebration, Luceroâ€™s new album All a Man Should Do is the hangover. Itâ€™s a welcome style change from a band that spent the last few records as the life of the alt-country party.

After 15 years, Ben Nichols is the peopleâ€™s tired troubadour. He and the band have been all over -- Texas, Tennessee, California. You name it. But touring life takes its toll and the first half of the record spends its time focusing on how thatâ€™s shaped the men Lucero have become. In his stories, Nichols avoids the sugar coating because experience has taught him otherwise. On the beautiful â€œI Woke Up in New Orleans,â€ he tells a lover, â€œCome on, babe, we both know itâ€™s too late, for either one of us to still be thinking that I could live my life some other way.â€ The promise of a different life is years behind him. He has made peace. He is self-aware.

But on All a Man Should Do, he is also more self-assured. The second half shows a different side of the band. While it remains slow and pretty, there is more optimism than weâ€™ve heard in a while. It appears thereâ€™s a woman in Nicholsâ€™s life and it ainâ€™t his guitar. Sheâ€™s done something to him. He sees a light in his life. That this is not the worst possible outcome. â€œIâ€™m In Love With a Girlâ€ and â€œYoung Outlawsâ€ tell tales going well beyond that of a stoic loner. On â€œThey Call Her a Killer,â€ he even professes, â€œI donâ€™t wanna smoke, donâ€™t wanna drink, go to work, I can barely eat, come on now killer, have mercy on me, Lord Iâ€™m in trouble all right.â€ For a band usually best enjoyed over a fourth glass of whiskey, those are some endearing words.

This may not be the wildest, but it sure is the prettiest Lucero album in years. Fans of the older, slower stuff or the first half of last yearâ€™s â€œBy the Seat of Our Pantsâ€ tour will find plenty to enjoy here. Ted Hutt (Flogging Molly, Gaslight Anthem) shows up for his third stint behind the boards in as many records. Hutt is a slick producer, which, oddly enough, provides Nicholsâ€™s gruff voice the beautiful contrast it shines so brightly against. Whether backed by an acoustic guitar or Rick Steffâ€™s reliable piano, Hutt finds a sweet balance, most noticeable on â€œWent Looking for Warren Zevonâ€™s Los Angeles,â€ the albumâ€™s best track.

Lucero are ten albums into their impressive career. By now, they know what they do well. However, it is nice to hear a seasoned band like this mix it up. Theyâ€™re at their most fun singing about whiskey while the brass section forces you to get up and dance. But on All a Man Should Do, they deliver something specialâ€”an album that shows our weary travelers making peace with the world and maybe even finding happiness in it.

Caffiends: No Gods No Decaf

The Front Bottoms: Back On Top