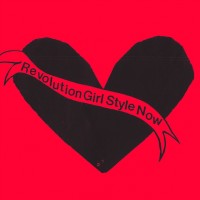 This comparison may be far fetched and esoteric, but I'm going to go ahead and make it anyway:Â Revolution Girl Style NowÂ reminds me of The Monk byÂ Matthew G. Lewis. Now, an early 90s punk demo tape doesn't necessarily call for comparisons to 1790's gothic literature, but just bear with me here. The Monk was written by a 19 year old who had little to no experience writing novels (though he dabbled in poetry). What's peculiar about the novel is that the author improves as a writer over the course of 420 pages, meaning the novel gets increasingly better as it goes along. Kathleen Hanna was a woman who had little to no experience writing music or lyrics (though she dabbled in spoken word). As Revolution Girl Style Now goes on, it gets increasingly better, as if the band had gradually learned to hone their songcraft (It's telling that the band would re-record the last six songs on the demo, as those are glaringly superior to the tracks that precede them). The similarities don't stop there. A lot of the gender blurring in The Monk was perhaps spurred by Matthew G. Lewis's stance as a closeted gay man who found sexual boundaries damn near useless. The members of Bikini Kill (Hanna especially) had a strong viewpoint on various gender issues and social politics. Music being a little more appealing than spoken word poetry, they ended up recording this demo to start their conversation.Â

Revolution Girl Style Now proves that Bikini Kill were a band with a sharply honed viewpoint from conception. Every hallmark of their social issue conscious lyricism is on display here on their demo tape. All the qualities that permeated their subsequent releases and make the band the subject of think pieces today are front and center in the original 8 songs on the demo. Yet, this thing gets off to a shaky start. "Candy" starts off coyly with a slow build, but the track itself drags with a sustained slump stuck directly in the middle of the song. "Daddy's Lil Girl" has a composition that's tighter and a delivery that sports more energy, but it still outwears it's welcome. The lyrical message of the song is drained lifeless by the end, resulting in a back half that sounds like the empty husk of the first. "Feels Blind" is the first flash of the band's true brilliance. This momentum is sustained over classic songs like "Carnival" and "This is Not a Test," which was later re-recorded for the band's split with Huggy Bear.

With these tracks, the band displays a better sense of timing; a certain instrumental swing that bolsters the lyrics and keeps them out of the dangerous zone of self-aggrandizing. These songs don't differ wildly from their counterparts on the Bikini Kill EP (though, it is weird to hear "Suck My Left One" without Ian MacKaye introducing the track). Because of this, the appeal of this reissue may be more historically centered. Â There are the bonus tracks which, honestly, do not add much to the package. "Ocean Song" is a grunge-esque exercise that deflates itself over the course of its running time. "Just Once" and "Playground" are the works of a band who don't yet realize that brevity is a powerful weapon. These tracks may satiate the mildly curious, but they don't exactly reward you for repeated listens. So, overall, this is a reissue of an important band's least essential release (yes, I'm including the underrated Reject All American). Fans should check it out, but newcomers should look elsewhere.