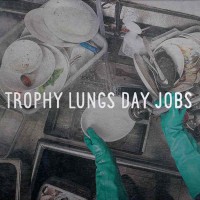 Trophy Lungs express so much on Day Jobs and in doing so, they convey why Boston's punk scene is alive and kicking by marrying a lot of sub-genres. Melodic, skate and pop-punk all find a place on the record, shredding from life on the road to life back home to life, well, in general. One of the strongest features of the album is their take on American politics which is passive-aggressive but laced with enough messages to prod instead of provoking. Think of Red City Radio meeting Blink 182. Mature and pretty fulfilling but packed with enough vibrancy to amp you up in the pit.

The self-titled track has that vocal interplay which feels familiar to what Mark Hoppus and Tom DeLonge did back in the day. Spunky, energetic and infectious harmonies. Which in turn lends an extra edge to the throaty yells of "Bathroom Graffiti" (an ode to fallen friends) and "The Big Eddie." It's a very interesting contrast which has a musical setting that feels like raw, juvenile punk but as soon as the lyrics kick in, you're taken for a huge spin. A lot of the record are focused as methodical statements over big hooks, punk-banging riffs and frenetic drums; all rife with intent a la Success' last album. And we all know how massive a comparison that is this year. Day Jobs asks you to question the established order and undoubtedly exceeds expectations. There's something here for all punk fans. Highly recommended!