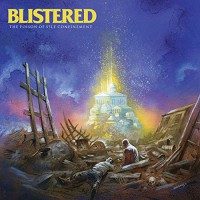 The Poison of Self Confinement (2015)

And the award for most mosh-tastic album of the year goes toâ€¦ The Poison of Self Confinement by Blistered. The Florida hardcore band uses a great deal of late '90s and turn of the century metalcore in their eardrum annihilating craft. Also, moshcore. Lots and lots of moshcore. To the point where I have to look behind my back while listening in my lonesome, to make sure a spontaneous pit combustion isn't swarming around my speakers.

The ramping up on â€œPath of the Cowardâ€ forces the listener to start an ascension with climbing guitar licks, while the mountaineer of orderly drumming aids in trudging the way up Mount Moshington. Finally, a reason to use those carabiners for their intended purposes.

The gate to a moshcore paradise opens, which, to paint a picture, involves a lot of screaming and rhythmic, sweat drenched, flail-worthy chugs (mouth-guard encouraged if at novice-level, itâ€™s your own fault if you get hit, â€˜ya know?). The meat of the album falls in this spin kick sanctuary, where if you donâ€™t want to get all that physical, â€œIllusion of Destinyâ€ and â€œThe Poison of Self Confinementâ€ will still make you shake your head, even if youâ€™re not coordinated enough, in synch with the persistent guitar wailing and body buckling bass. â€œLashâ€ hits these notes, too, but with a momentary spooky riffing fit for ghost hunting.

The total jammer comes to you by way of â€œMemories to Burn,â€ with the fastest, most upbeat strumming, breaking apart the steadiness from the middle of the album, while trailing off into the finale of â€œInto the Dying Lightâ€ and, required listening for metal and hardcore fans, â€œDeath at Heavenâ€™s Doorstep.â€ There, you reached the peak, and it didnâ€™t even require copious amounts of saucy bars made from apple cores and old, shredded Chinese newspapers, just the power of moshing metalcore and rolling up your sleeves to show off those Hatebreed and 108 tattoos. Blistered made quite the metalcore gem with The Poison of Self Confinement, and itâ€™s exciting to see what comes next. Go mosh already.

The World is a Beautiful Place and I Am No Longer Afraid to Die: Harmlessness