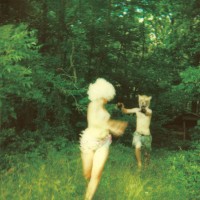 The World is a Beautiful Place and I am No Longer Afraid to Die.Â

That band name never gets old. Not a bad philosophy either. I can distinctly remember becoming acquainted and subsequently falling in love with Whenever, If Ever. "Getting Sodas" was the optimistic battle cry against depression. It painted mental illness (as seen on the acoustic "Mental Health" on this record) as an ingrate and fit perfectly for an unrepentant admirer of indie-emo such as myself. That record packed a lot of depth and immensity, though I was initially reticent to admit how quickly it helped change my life. They toyed with spoken word on a subsequent EP, Between Bodies, that hinged more on cerebral introspection via spoken word which missed the mark for me. But lo and behold, leave it to Harmlessness to rediscover the wit and irascible, emotive charm of the band, which funnily enough nodded back to their older material . The same material that became one of the templates by which I would later gauge all indie records.Â

"You Can't Live There Forever" earns its way into the winner's circle of my heart as it acoustically trods on issues surrounding suicide and depression. It's a riff-laden record which scrapes a lot of angular punk cadence at times but it's these sing-songy indie gems that really shine, reprising the choruses of their spectacularly quirky 2013 LP mentioned above. Make no mistake, this record paints something gloomy, self-aware and extraordinarily painful but it's a picture worthy of adoration of all melodic-indie fans which will be tough to emulate. Upon initial listening, this album struck me as being not only a mixture of all corners of what could be considered indie-punk, but also perhaps the best refinement of the genre-mixture I've ever heard. It manages to emote with minimal drama and technical rhythms thanks to faster tempos and octave chords. Pair all of this with very interesting and atypical guitar leads (best typified by "January 10th, 2014") and what you have is certainly one of the most captivating tunes based on violence against women in Juarez, which they take lead from one of their favorites in At The Drive In (a la "Invalid Litter Department"). Lyrically, their take on Diana, the vigilante, is extremely dark but tear-jerking. This continues their collection of stories about imminently relatable people in dismal life situations. The way that some of these lyrics feel like they could be about the listener and their friends or experiences is a huge part of this album's immense strength. The characters on the record loom heavily and enigmatically. People seem slighted and spiteful toward so many things, including God, but TWIABP waxes on about existentialism and coming to terms in a jilted manner with a loss of faith. Or a believer struggling to reconcile an all-loving omnipresent via the cruelness of their life.Â

There are a few indie/synth-pop triumphs later on but the start-stop dynamic of so many tracks help establish something comprehensive, unflinching and uncompromising. From the singalong "Wendover" to the emo vibe (a la Into It. Over It.) on "Mount Hum", you find yourself drowning in intelligently-conceived, darkly thematic songwriting. It's a welcome celebration of the scope and promise of all that indie music can offer. It brings to mind the feeling that overtook me the first time I heard the band, kinetic and anxious, as I began to understand just what their hype was about and why they were changing so many lives.

Blistered: The Poison of Self Confinement