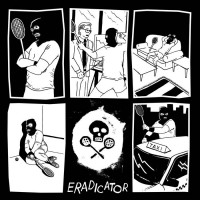 Eradicator is a Chicago-based band that is made up of members of Direct Hit! and Galactic Cannibal. Some might call their new self-titled EP a pop-punk release and some might call it a hardcore release. Honestly, there is so much of both subgenres in these songs that it falls right in the middle of the two.

The title track is a perfect example of the pop punk and hardcore amalgamation this is Eradicatorâ€™s overall sound. The guitar parts consist of short, but heavy power chord-driven riffs. Andy Slaniaâ€™s (the bandâ€™s lead vocalist) screams the lyrics with a lot of angst and rage in his voice. You can definitely hear how the vocal work is similar to Direct Hit!â€™s and Galactic Cannibalâ€™s more intense songs.

Contrary to the title track, one of the more pop punk-sounding tracks is called â€œD Squash Man.â€ This is one of the more laid back tracks on this EP. Rather than the instruments playing really fast in a more hardcore fashion, they are played at a slower and more identifiable rhythm. The guitarist still plays these hard-hitting power chord progressions, but Andy Slania doesnâ€™t shout like he does in other songs like â€œOn The Courtâ€ and â€œPusshead,â€ instead he is a little calmer and there is a bit more melody in his voice.

It would be also appropriate to quickly mention that the last track on this EP is almost twelve minutes of two people playing tennis, which the band cleverly titled â€œGreatest Hits.â€ It takes up the entire B-side of the vinyl release. Personally, I found it pretty funny.

Pop Punk? Hardcore? Pop-hardcore? Pop-hard? Pop-core? Popcorn? Even at this point Iâ€™m not really sure where this release falls, but what I do know is that it is great. Itâ€™s so full of aggressive and angry energy that fans of anything Nick Woods has been involved in will feel right at home and enjoy this 10-inch a lot. If you havenâ€™t listened to either Direct Hit! or Galactic Cannibal before, my recommendation for you would be to go back and listen to those bands first and then come back to this one.

30 black test pressings of this 10-inch were sold online with alternative artwork. They were the â€œremaining amounts left over from Dummerfest 2k15.â€

Built to Spill: live in Allston