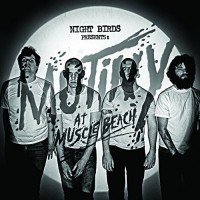 For a band that sounds most at home in a dingy basement or seedy club, Night Birds sure have made a name for themselves. After a couple of 7-inches and two highly regarded LPs on Grave Mistake, the band has hit the big time and teamed up with the illustrious Fat Wreck Chords for their new album, Mutiny at Muscle Beach. So how has small-scale punk rock stardom changed the band? Well, it hasn't. Night Birds still deliver the same surf-influenced manic hardcore punk they always have, and as usual, the execution is pretty much flawless.

Since one of Fat's hallmarks is polished production, it's worth addressing that first. The sound of Mutiny at Muscle Beach doesn't really differ from previous Night Birds releases. It's still recorded to tape, and perhaps there's a little bit more polish than in the past. Paradoxically, the polish actually amps up the rawness of the band's sound. That may not make sense when you read it, but it does when you hear it. For those concerned that the "Fat sound" would wash away the sonic elements that make Night Birds stand out, don't be.

The album opens with the frantic "(I'm) Wired," which is a declarative that describes the band not just on this song, but throughout the album. It's a little bit cliche to say the album replicates the live experience, but it's accurate in this case. If you've caught Night Birds live and seen frontman Brian Gorsegner tossing himself around the stage, Mutiny at Muscle Beach sounds like that looks. So much is made of bands struggling to capture the energy of their live shows in their recorded output, and yet this band has consistently done that, and does so again here.

While the band generally sticks to their usual subject matter, with lyrics projecting a general disdain for humanity's current state, they do branch out into somewhat more diverse areas. "Blank Eyes" channels the helplessness of Gorsegner and his family's struggle with his wife's post-partum depression, while "Left in the Middle" is perhaps the band's most overtly political track yet, touching on the polarized state of the American electorate. And it wouldn't be a Night Birds record without a surf-tinged instrumental, and "Miskatonic Stomp" is a particularly moody entry in that category.

Both musically and lyrically, Mutiny at Muscle Beach finds Night Birds at their absolute peak. The words are as clever and angry as ever, P.J. Russo's riffs careen and crunch and the rythym section, including bassist Joe Keller and new drummer Darick Sater, deftly control the musical chaos. With about two months left in 2015, someone's going to have to do something special to supplant Mutiny at Muscle Beach as the best record of the year.

Ought: live in Allston