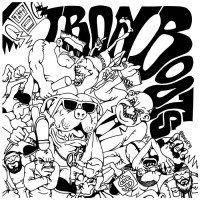 Iron Boots longevity in the early 2000s was somewhat short lived, but much like many hardcore bands, they contributed to compilations, released a demo and recorded a few small releases all in their four-year career. For the first time, their discography has been completely compiled into one album for avid fans to enjoy.

As the band self describes, they are reminiscent of Warzone and the rest of '80s hardcore. Every song on Complete Discography is straight to the point hardcore without any metallic jive. The band almost has a punk influence to their sound.

One of the best things on the compilation is that the album doesnâ€™t go in order by release; it is compiled to allow the songs to bleed into each other like a solid album should. While Easy Green and Demo â€˜04 are compiled correctly, the album goes askew when songs from Weight Of The World come into play with the bandâ€™s discography. While each release proves better than the next, the real progression is listening to Iron Boots come into their own as NYHC band.

Itâ€™s really when the discography hits â€œBizarre,â€ off of the Generations Compilation that we see the bandâ€™s extended energy. With an intro where the bass adds a Fugazi effect, the seven-minute song has a ton of elements of hardcore, metal, punk and much more. The song's various parts truly create an ensemble that can be seen as an epic in the bandâ€™s career.

The album ends with another song from the compilation called â€œLocked In Sight.â€ The song gives a brief outro to the discography that reminds us that although Iron Boots matured as a band, they still managed to maintain the same energy and spirit they started with. Complete Discography is a great way to re-live Iron Boots or get into them so many years later.