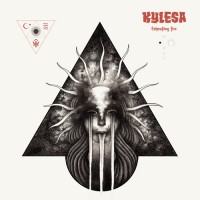 Kylesaâ€™s 2013 album Ultraviolet saw the now veteran sludge band removing some of the grit and dirt from their sound. It's a development that's been long in the making, as with each new album, their sound gets progressively cleaner and crisper. The band's pounding songs still dig their fingernails into you, but those fingernails just happen to get cleaner and sharper with each new iteration. They're a sludge band with a dwindling amount of sludge; a band that displays a wider array of influences while attaining a more accessible sound. Like Alcest, Kylesa are considered a metal band because of their past output, but their current music tells a much more varied story.

The aptly titled "Crusher" opens the album with a concise sonic mission statement complete with vocalist/guitarist Laura Pleasant's cooing howl, expressive guitar dynamics, burrowing bass lines and some icy synthesizer work. The song nestles itself comfortably in whatever dark field separates the lands of Black Sabbath and Bauhaus. "Moving Day" doesn't develop a building momentum, but opts for a consistent mid-tempo lull instead. It's one of the most straightforward songs on the album and it leans a little closer to shoegaze than it does metal. Other tracks like â€œNight Driveâ€ follow a similar path.

Many of the songs straddle the line between moody, chugging metal and atmospheric, blissed out psychedelic rock. The vocals are clean (fans of Static Tensions may be disappointed) and the instruments are covered in a thick layer of haze. "Shaping the Southern Sky" is very emblematic of the album as a whole. It's mostly operates at a slow, surging simmer before finally bursting forth with some quick guitar heroics as the song ends. As far as songwriting is concerned, it more than displays where Kylesa are at this point in time. "Falling" sounds like a lost Cure b-side for a solid 90 seconds before the vocals kick in. The song never loses that icy sense of loneliness Robert Smith has been peddling since the late 70s, however.

Baroness recorded an album with Dave Fridmann earlier this year, but Kylesa would be a better pairing at this point. With the band's psychedelic tendencies and ethereal interests, the producer would have a field day with the Kylesaâ€™s current onslaught. Exhausting Fire is very much a sister record to Ultraviolet. The only difference is that the songwriting is sharper and the instrumentals are a little less powerful. Your reaction to this album will very much depend on which aspect of the band you prefer.