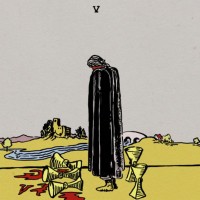 Nathan Williams just canâ€™t seem to get out of his own way. After nearly derailing his career early on with a disastrous, highly publicized meltdown at the 2009 Pitchfork Festival in Barcelona, Wavvesâ€™ reputation took a sour turn that lingers as a nasty taste in the mouths of Williamsâ€™ detractors. Shortly after, however, he found himself redeemed with the 2010 release of King of the Beach, an exceedingly catchy album greeted with enthusiasm for its poppy garage take on the Beach Boysâ€™ good vibrations.

Five years later, the release of Wavvesâ€™ fourth studio album, V, finds itself preceded by friction between Williams and â€œsuccubus major labelâ€ Warner Brothers (his words, not mine) regarding the handling of the albumâ€™s release. Williams doesnâ€™t seem particularly concerned about any fallout from this turmoil, judging from the plethora of selfie-videos posted of himself smoking joints on Instagram. Chalk it up to the artistâ€™s process.

V is a thoroughly poppy affair, featuring Williamsâ€™ trademark stoned, self-loathing attitude coupled with beachy melodic charm. Gone is much of the Nirvana influence found on prior album Afraid of Heights, excising the darker elements of said album that often came across as dreary and self-pitying. Instead a vibrancy and energy inhabit V that is more in line with '90s pop punk than grunge. Itâ€™s a fun if not particularly deep vibe that Williams is going for on this album, and taken at face value is a successful effort nearly from front to back.

Wavves channel within V much of the bouncy pop that characterized the best songs on King of the Beach. â€œHeavy Metal Detoxâ€ opens the album on a suitably fun note, followed by â€œWay Too Much,â€ the albumâ€™s first single (and prime subject of tension between Williams and Warner Brothers). The middle of the album is home to some of the best songs on the album, including the straight-up pop punk of â€œAll The Sameâ€ and â€œMy Head Hurts.â€ â€œFlamezeszâ€ is a zany number with an ear-catching chorus, and one of the better songs at conjuring Williamsâ€™ stoner heights. Penultimate track â€œTarantulaâ€ also reigns as one of the better songs in the Wavves discography.

Throughout it all, Williamsâ€™ lyrics add weight to the lightness of the music, delving into his own insecurity and anxiety, subjects that over the years have become his bread and butter. Whereas King of the Beach had weirder, quieter songs such as â€œGreen Eyesâ€ and â€œConvertible Balloonâ€ to add some variety to its running time, Vâ€™s songs are all solid if somewhat similar in their pop punk aims, creating a vaulted plateau (or mesa, if you will) in terms of quality, rather than a dynamic series of peaks and valleys. In this manner V can come across as rather one-dimensional -- but that one dimension is fun to sing along with, so no harm, no foul.

Despite a short list of shortcomings, V is Wavvesâ€™ best album since King of the Beach, and continues the strong run of stoner punk that Williams has been on the past five years. Letâ€™s just hope he can make it to his next album without self-destructing completely.