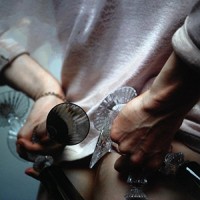 Lower began as a more coherent version of what their fellow countrymen and oft-compared peers Iceage were essentially doing, with a raucous mix of squealing, '80s-era American hardcore and the morosity of post-punk that paralleled it at the time. Their Walk on Heads EP was a sterling example of that, but it was natural to assume the band would clean up some as time passed. This happened sooner than expected on a followup single, "Someone's Got in for Me," a drawn-out, tortured act of paranoia with cleaner vocals; their full-length debut, last year's very good Seek Warmer Climes, found them all but transforming into a modern post-punk act with hints of noise rock, articulately able to spell out personal and sociopolitical crises and capable of emotional powerhouses like "Lost Weight, Perfect Skin" and "Soft Option." The progression continues on this EP, I'm a Lazy Son... But I'm the Only Son, another excellent chapter and their most accomplished release yet.

Son isn't a complete genre overhaul, but Lower have definitely decked out their sound with more instrumentation, slightly less noisy guitars and a newly gothic sheen. It increases the immersive quality of their sound and establishes better atmosphere than on previous releases, but they haven't skimped out on the melodies or desperation. First single "At the Endless Party" is a sure highlight, with solemn, one-note piano keys opening it up, and frontman Adrian Toubro's vocals high in the mix and touched with some reverb above a bass-driven foundation, with a little bit of those splashy electronic drums at certain intervals. Son takes little time to get to the vulnerabilities, with Toubro pleading "C'mon sweetheart, take me as I am" as a memorably miserable hook.

The EP quickly delivers an emotive climax on the next cut, "Keep Me in Mind." It follows a similar formula as its preceding track, but builds a serious crescendo in the process, boiling and brewing with subtle implications of betrayal and toxic relationship behaviors until Toubro unleashes in the bridge. He's never sounded as susceptible as he has here, as he supplicates over and over, "If you need a crying shoulder, well keep me in mind," later adding, "because I'm available...I'm cheap." There's a sick riff about four minutes in, right before that bridge, which honestly reminds me of something The Edge might do on an early '80s U2 album too, in an obviously good way.

Son remains strong through its closing trio, with the lively backbeat of "The Rack", a comparatively upbeat midpoint; the weirdly blunt shrug of "Hot and Bothered" ("Somebody died tonight. / I couldn't care less"), where Toubro is far more concerned with a love's dissolution and leads with something of a sneering swagger; "Nasty Business" is a drawn-out closer with lots of subtle brass and percussive instrumentation, and has a bit of a film noir soundtrack vibe towards its finish.

Basically, Son is another strong entry in Lower's growth--their strongest yet, really. It's a welcome entry point for new listeners and rewarding listen for long-time followers.