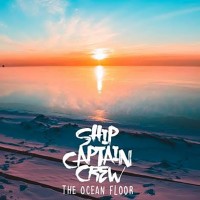 Ship Captain Crew has been at it for a long time. The band is back with six songs that are ready to spread the bandâ€™s name further. Their latest EP, The Ocean Floor is a nostalgic sounding pop punk mix of songs that still have a contemporary feel to them.

The Ocean Floor is a mixture of acoustic pop rock songs and pop punk tracks that are melodic enough for the two to coexist on record. Each song is upbeat and catchy, which is perfect for the ending of summer moving into fall. â€œDear Mara, Sincerely Sarahâ€ is a song that starts out very soft and kicks in just enough for the song to become more invigorating with each listen. The rest of the EP follows this format; soothing songs with pop punk drive.

While energy isnâ€™t quite the word to define Ship Captain Crew, the band puts a lot of heart into their songwriting. The lyrics are perfectly vocalized by singer, Roger Moreno, whose voice is soothing yet edgy at the same time. His vocals carry the melody of each song strongly while accompanied by intricate guitar riffs and prominent drumming.

The title track, â€œThe Ocean Floorâ€ seems to be the definitive Ship Captain Crew song. The song not only starts out acoustic but moves into melodic territory where the guitarâ€™s tones and riffs are at its strongest. Moreno even mixes up the vocals and adds some Spanish lyrics to further the strength of this track. The song structure is perfect and makes for one of the best written songs on the album. The perfect blend of acoustic, melody, and pop punk join to create the sounds that overall the band seem to be going for.

Ship Captain Crew is definitely an act to look out for as they begin to become more prominent. With a spot on this yearâ€™s Vans Warped Tour and supporting acts like Knuckle Puck and Real Friends, itâ€™ll be likely there will be a big future for Ship Captain Crew.

Eagles of Death Metal: Zipper Down