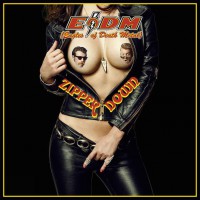 What do we know about Jesse Hughes?

Perhaps the best depiction of Hughes is the cover of Duran Duranâ€™s 1982 single â€œSave a Prayer.â€ â€œDonâ€™t save a prayer for me now, save it â€˜til the morning afterâ€ effectively demonstrates the contradiction between the rock and roll lifestyle Eagles of Death Metal depict and the wholesome values of Reverend Hughesâ€™ devout Christianity. But something is missing. Thereâ€™s plenty of rock, but many of the songs come across hollow, or as if Hughes has to keep up this persona heâ€™s created though his life has changed. Only "The Reverend" blends the two worlds...sort of. â€œSilverlake (K.S.O.F.M.),â€ on the other hand, may have appeared a funny concept but hardly feels fresh. These arenâ€™t highbrow ideas nor do they pretend to be, but gimmicks are tricky to pull off over a whole album, let alone a decade plus career. The same old tricks donâ€™t carry a punch anymore.

Musically, itâ€™s the same Eagles of Death Metal youâ€™ve either grown to love or hate. The lyrics arenâ€™t Thoreau nor should they be. The hooks are simple and repetitive and fit well on a jukebox at the local dive bar. They are greasy, dirty numbers that benefit from being on your feet. Hommeâ€™s drumming establishes that and Hughes hardly goes one song without mentioning dancing, moving and/or boogying. When Eagles of Death Metal double down on the stupidity and fun, things feel the most natural, if still the least interesting.

Hughes never apologizes for the subject matter on his albums nor the lifestyle heâ€™s lived. Heâ€™s a sinner but having a hell of a lot more fun than the rest of us. Unfortunately, his life has more going on than the resulting songs. Hughes is also releasing a documentary,Â The Redemption of the Devil, that would make for a more interesting companion piece. But Zipper DownÂ on its own is a single short burst of energy stretched too thin. Â