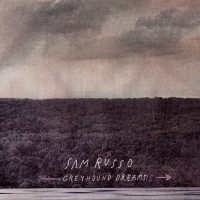 Greyhound Dreams is the latest album by the UKâ€™s Sam Russo, released by Specialist Subject Records in the UK and Red Scare in the States. The album features ten songs of Russoâ€™s brand of acoustic punk/folk.

Kicking off with the catchy â€œSometimesâ€, the album starts strong. The track sets the precedent for the rest to follow, featuring Russoâ€™s husky vocals and melodic, plucked guitar melodies. In the chorus, the refrain of â€œsometimes, sometimesâ€ bursts above the music, backed by female vocals. Itâ€™s a great opener.

The rest of the album carries on in similar fashion, as Russo shows his talent for storytelling, especially on songs like â€œCrayfish Talesâ€ which are simple and short, yet emotional and well written.

Russo often shifts between quieter, more relaxed vocals to his gravely, loud style, which works incredibly well throughout the record. Musically, the album is simple and sweet. Mostly plucked or strummed acoustic guitars which the odd backing vocal here and there. Nothing much more is needed, however, to make his spectacular voice standout.

On â€œWestern Unionâ€, the closer, Russo sums up the best parts of the record. Itâ€™s short, simple, and with great vocals. Backing vocals come in to make the catchy parts really pop: â€œitâ€™s 3am outside a Western Union in the rain, and Iâ€™m alone.â€

Russo demonstrates songwriting and simplicity at its best on Greyhound Dreams. Thereâ€™s no Sam Russo band, because there isnâ€™t one needed. He manages to carry a whole album, without it becoming repetitive or boring, with an acoustic guitar and vocals alone. Thatâ€™s a talent to have.