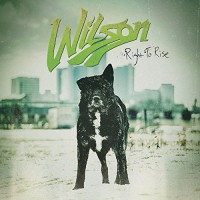 Those in punk circles tend to mention MC5, The Stooges, Death or maybe Negative Approach when talking about the music of the Motor City. In truth, Detroit has been home to a fair number of commercially successful rock acts over the years. Ted Nugent, Bob Seger, Alice Cooper and Grand Funk Railroad all have deep ties to the city. Wilson is a Detroit band that plays hard rock music that is in the tradition of those more mainstream acts. Their sound is on the heavy side of what you may hear on rock radio. Itâ€™s commonly referred to as party metal. If Wilsonâ€™s 2013 debut Full Blast Fuckery was the party, then Right to Rise is the hangover. Or maybe the hair of the dog.

The cover art even features a photo of a mangy but strangely defiant looking dog, with the city of Detroit in the background. The album opens with the title track and â€œGuilty (Youâ€™re Already Dead),â€ two thick slabs of catchy hard rock goodness. â€œCraveâ€ seems like it has a legitimate shot at being a hit with its heavy riff and melodic chorus. Itâ€™s also the first of a handful of songs about good old fashioned lust. Meatmen main man Tesco Vee plays the role of guest DJ in introducing â€œWindows Down.â€ Itâ€™s a celebratory song that name drops various Detroit streets and neighborhoods. â€œAll My Friendsâ€ (mourning the fallen) and â€œSatisfy Meâ€ (lust again) wrap up the very solid first half of the record.

Unfortunately, the second half doesnâ€™t start off nearly as strongly. â€œThe Floodâ€ (lust again) and â€œHang With the Devilâ€ veer dangerously close to Nickleback territory lyrically. â€œI Am the Flyâ€ and â€œGive â€˜em Hellâ€ are decent but not exceptional. â€œWaiting for the World to Cave Inâ€ redeems side two. Itâ€™s a bit slower with another memorable, melodic refrain. Right to Rise wraps up on a high note with â€œBurnâ€. It starts out with a bluesy vocal intro, but ends up being the heaviest and longest song on the album.

Overall, the production feels a bit heavy handed. The guitar and vocal effects are used sparingly, but the occasional drum triggers are at best distracting and at worst annoying. Wilson would probably benefit from a rawer, more bare bones production. Hard rock and metal (and punk obviously) donâ€™t really need all the bells and whistles. Despite its warts, Right to Rise is an awfully enjoyable listen. Probably more than it should be. If the beard is the new mullet, then maybe Wilson is the new Dokken. File this one under guilty pleasure.