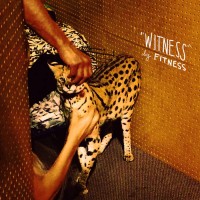 Fitness are a band who describe themselves as â€œpoppunkgaragegrungerockâ€ from Wisconsin. Witness -- which is confusingly similar to their band name -- is their debut record, clocking in at 15 songs.

â€œThe Gapâ€ kicks things off swiftly and is followed up immediately by the wonderful â€œPush Me Outâ€ which succeeds in flitting between being punky and poppy at the right times. â€œMountain Death Songâ€ then follows up and takes things in another direction with itâ€™s moody, grungy sound. It seems their genre description was pretty accurate.

One of the highlights is â€œMilwaukee Distance Bluesâ€ which kicks off with a poppy, kinda bluesy riff and opening line â€œSitting on my couch. Read a book. Watching Netflix.â€ Weâ€™ve all been there. The track then later bursts into a rock n roll chorus. Other highlights include â€œKingfisher,â€ a rocky punk song, spanning only 42 seconds, and most of that being a guitar solo.

The musicianship on the record is great, the guitar work is solid and grungy -- especially on â€œPainted My Wallsâ€ -- while the vocals are moody and dark. The sound is completely unfocused. In a good way.

Itâ€™s quite amazing how many genres the band have managed to weave together throughout this record. So much so that every song seems to be totally its own thing. Some songs are four minutes. Some are less than one. If they can trim down the fat -- 15 songs is a lot of songs -- theyâ€™ll be on to a winner with their next release.