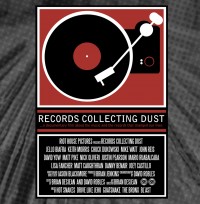 â€œThere would be no â€˜Holiday In Cambodiaâ€™ without Hawkwind.â€ â€“ Jello Biafra, Records Collecting Dust

One of the most common questions a band gets asked in an interview is â€œWhat bands/records were you influenced by?â€ and the members will give the interviewer a few examples. Itâ€™s a clichÃ©d question, but it is a necessary one in order to get a personal glimpse of the band and how they got their sound.

If you havenâ€™t guessed by now, when I say â€œrecordsâ€ I donâ€™t mean MP3â€™s or CDâ€™s, I mean vinyl records. This film is an exclusive peak into these artistsâ€™ private record collections. Not only do they talk about the albums that influenced them, but they also talk about influential tracks, the first album and single they bought with their own money, what record stores they would shop at regularly when they were younger and more.

For some reason the story of how a person found a record in the store is fascinating. Thatâ€™s also what this film captures very well â€“ the story of the hunt and the reasons why these people bought the album. But it also goes on to show how it molded them into the people they are today. You would think that since these interviewees who are very much involved with underground music would show off their lesser known albums in their collections (at certain points people do), but a majority of the records they tell stories about are albums that were very much mainstream during the time they were first released. Several people talked about their first records by bands like Kiss, The Beatles, The Jackson Five, Cheap Trick, and The Partridge Family.

Records Collecting Dust is not a flashy film. Sure, they threw in some live performances here and there, but other than that itâ€™s a very down to earth, yet very insightful and interesting documentary where we get to see some of the punk sceneâ€™s most significant personalities give us a bit of a â€œshow and tellâ€ with their record collections. The only small gripe I had with this film is that it is very West Coast-centric. I was hoping to see other regions represented as well, but perhaps that what could be an idea for a sequel if there were to be one in the future. Other than that, Records Collecting Dust is very much worth checking out. Punk rock fans in general will like this documentary, but chances are punk vinyl collectors will love it. As a vinyl collector myself, I can tell you that the hour flew by.