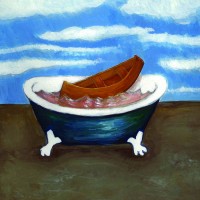 Bad Canoes new self-titled LP puts what makes them so special at the forefront and keeps it there for the duration. â€œRadio Without Rulesâ€ opens with the band immediately jumping into a snappy groove thatâ€™s reminiscent of early synth-punk and no wave. Driven by powerful earworm of a riff, itâ€™s topped off by frontwoman Mistyâ€™s wonderfully deep vocals. Itâ€™s almost as if someone took a 60â€™s soul singer and threw her in front of The Screamers. But then, just as the groove is set, the band suddenly flips the table and goes from nice to nasty. The rhythm becomes arhythm and Misty starts shrieking like a banshee. But, whereas many bands would then just sink into chaos, then band through of sort of primal force, forces the song back into a anthem. Misty howls like Billie Holiday, â€œThey plaaaaaaaay whatever they want!â€ It reminds one of the kind of victorious cry Vikings would probably howled as they jumped off their longboats- at least for me. But, of course, not content to pull the song from sweetness to saltiness and back to sweetness again, the collapses back into chaos with â€œIf you donâ€™t like it, get the fuck out!â€

This rapidly shifting strategy follows the entire EP. â€œJazz History,â€ for example, I think busts the balls of â€œJazz guysâ€ (you know the type) and acts as a sequel to Sisterhood is Powerfulâ€™s â€œ6666â€ by mackinâ€™ on Moses. But as the song progresses, its 150 second running time has three of four movements which seem to fit the bandâ€™s naturally schizophrenic style. There is an order to the sharp contrast, but you have learn to understand the chaos first.

It doesnâ€™t hurt that the band works so well together. Drummer Muscles and bassist Krispy have created a rock solid bond. This isnâ€™t reggae music, but by the way the two lock into step, both increasing the impact of the other, thereâ€™s a similar dedication to rhythm. It also doesnâ€™t hurt that both of them play with a visceral force. even when the band is playing slower parts, they sound like they are playing fast because they hit those strings and skins so hard. This sister-in-arms cadence allows keyboardist Ivory to really expand on what she does so well. Mirroring Mistyâ€™s two-faces, Ivory flits between soothing, new wave lines and lines where it sounds like she randomly hitting the keyboard with a ball-peen hammer. That is to say, this is violent music in the best possible way.

Likewise, itâ€™s tough to overstate raw power of Misty vocals. Sheâ€™s still switching between her songbird coo and Siren scream and somehow, she knows just when to change gears to keep one interested and on ones toes. Likewise, her lyrics snap between the blatantly clear (see â€œRadio Without Rulesâ€) and the what-the-hell-is-this-even-about (â€œErotic Appsâ€- I have like no idea, man.) Still, as â€œMoon Dayâ€ shows, the band is still obsessed with the concept of the female as a celestial arbiter of life and death- including along with that a frank celebration of all the things that mid-day television commercials try to talk about so discreetly. Thereâ€™s a dark mystery to this band and you can use whatever tools you like to try to figure it out or build what you like from it.

Bad Canoes is more daring than itâ€™s predecessor in that it embraces both order and chaos more than its older sister. Despite the contrast, the mix is so fully formed that itâ€™s not so much a challenging release (in part because when itâ€™s catchy itâ€™s really catchy) as it is a different (and extremely refreshing) listen. Thatâ€™s not to say the band is playing to a wider audience by any means. I need but quote the band, â€œIf you donâ€™t like it, get the fuck out!â€