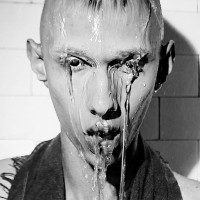 Yoko and The Oh No's

Yoko & The Oh No's are a Chicago band, but they very badly want to be a New York one. From the explicit Velvets references in "Nobody Wants To Know" (â€œTalking over radio/on the moonlit drive/We listen to VU/Jane says close your eyes") to the arch guitar lines a la The Strokes and second-rate NY 2000's bands like The Virgins, the trio is obsessed with the rock myth, the breakups, the one night stands that don't Â go anywhere but last in your mind. And in that sense Yoko pins down what they want in their lyrics and iconography, but the music just feels a bit empty.Â

Ironic too, considering the blue eyed soul Max G. clearly, desperately wants to evoke in his vocals but at best he sounds like a smoother Joe Jackson or (shudder) Jamiroquai. His uber-smooth croon and the over-deliberate clean sound all over this don't match this band's weird image and style at all - they're trying to create an (interesting on paper) hybrid of Sam Cooke, Loaded-era Velvets and 2000's guitar rock, but the songs fall flat in the process. They're radio-ready and bereft of bite Â and that makes the album mostly forgettable.Â

The last two songs "In Pieces" and "Who'd Stop Me" are a decent improvement over the first 8 tracks because they aren't trying to get airplay, they're rocking out just a little bit more, the harmonies on the former really work, and the swagger Max seems to want peeks out of it's cave. And I'll say that the playing here throughout is stellar, and I'm really hoping these guys come out with something a little nastier and aggressive the next go-around. After all they're young and have some time to bring out the big guns.Â

Mew / The Dodos: live in Boston

Coheed and Cambria: The Color Before The Sun