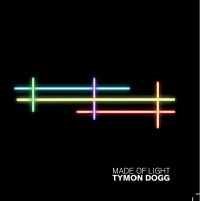 Say what you want, but â€œLose This Skinâ€ is one of my favorite songs by The Clash. Not just one of my favorite songs off of Sandinista!, but one of the favorite songs by the band. Period. Leading that idiosyncratic trackâ€™s warbled charge are Tymon Doggâ€™s distinctive, quavering vocals. Joe Strummer would take Dogg under his wings, eventually working with the singer-songwriter during his tenure with the Mescaleros. â€œA Pound of Grainâ€ from Doggâ€™s latest album, Made of Light, was originally written with Strummer. It would be easy to assume that Strummerâ€™s spectre looms large over this album, but that would be incorrect. Sure, there are some broadly political lyrics and impassioned shouts, but Made of Light is an eclectic collection of songs with their toes dipped in folk, psychedelic rock, and baroque pop.

â€œConscience Moneyâ€ and â€œTime For Moving Onâ€ kick the album off with a calm tone. Both tracks are reminiscent of Richard Thompsonâ€™s post-Fariport Convention output. â€œMade of Lightâ€ floats on pianos, strings and Spanish guitar and â€œRock Box Hammerâ€ saunters in as an Irish folk inspired instrumental as it builds and descends. â€œLike I Used to Beâ€ sounds like bedroom pop akin to the less washed out work of Ariel Pink (or the less psychedelic work of R. Stevie Moore (or Michael Stasis (you get the point)). It goes without saying that Dogg experiments with several different types of music. Yet, heâ€™s able to ground it all in his unique voice and takes ample advantage of his multi-instrumentalist talents.

The main drawback about the album is that itâ€™s a bit bloated. Doggâ€™s solo releases have been spare and spread out, so itâ€™s easy to assume that he has a large backlog of tracks that heâ€™s itching to release. Still, this album could have used an editor. Some tracks outwear their welcome while others could have been expunged altogether. â€œAs I Make My Wayâ€ is a mediocre track that is made redundant by the albumâ€™s superior and similar title track. â€œWalking Down the Roadâ€ sounds like a song sketch that never got fully fleshed out. â€œModern Artâ€ fumbles at itâ€™s intentions, but manages to squeezes by with its endearingly strange lyrical content.

Tymon Dogg has led an interesting life, even as just a sideman. Heâ€™s had a hand in some great tracks and his talent is obvious. Made of Light proves that he can cobble together a solid set of tracks, but as a whole the album doesn't extend past a simple and pleasant experience.