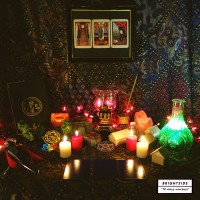 Seconds Matter was a great intro point for Brightside and one which showed a lot of promise. The World Reversed finds them taking a thoughtful and impressive step forward and one that's more melodic and shimmery indie-pop as opposed to jangly pop-punk associated with their older stuff. One gripe is that it's just three songs but I guess that's the point of teasing.

"The World" shines in its picky afterglow, highlighting soothing melodies and topping off this hazy backdrop with clever lyrics. Think Beach House meets Vampire Weekend. That's the aesthetic repeated on "High Priestess" which surprisingly leaves you with something more indelible, commercial and mainstream than the DIY flair I anticipated. The production's really over the top and it works for them. Overly polished but again, it fits the band's sound. "Temperance" best sums up Brightside's pop accessibility which feels familiar to Julia Holter's last record and comes at a time where dream-pop seems to be a great horse to back in the industry race. Â Pretty soon, I expect these guys to be pushed onto even bigger things. There's something mysterious and gratifying in their music and that alone's a big sell. I can only imagine how their shows at present with TWIABP and Foxing are being received.