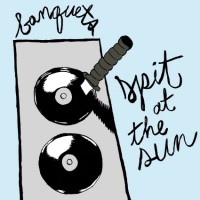 For those who doubted Banquets pedigree, their split with Nightmares For A Week last year was a resounding response as to why they're worth the hype. Tracks like "The Engineer" and "Come Home Ragged" stood out and stood tall, doing the unthinkable and even outweighing Top Button, Bottom Shelf. I could understand the cynicism though because just a year earlier, their self-titled dropped and honestly, it took me a few listens to get into. But when I finally latched on, I rediscovered just what these New Jersey rockers meant to me. Spit At The Sun is a great finale and a swansong that emphasizes how older and wiser they've gotten as they ride off into that bittersweet sunset.

"Forecaster" opens proceedings and picks up right where their 2014 set left off. Big hooks and melodic riffs to keep their indie/pop-punk game a cut above the rest. Like so much of their music, this song typifies the catchy, singalong anthems Banquets are accustomed painting for us. "Stop Signs In A Ghost Town" is a neat tribute to bands like The Gaslight Anthem which mixes nicely with the faster and edgier punk tracks such as "Piled High" and "No Rome". As usual, Travis Omilian brings his A-game with his dynamic vocals fitting nicely with the band as they shift tempos and dip in and out genres. Their range and versatility is spot on as usual. However, Omilian feels a tad more reserved on Spit At The Sun. It's not that bad a thing as it does fit the narrative at hand and it's one of a band that finally feels settled and rooted as opposed to their older body of work which felt restless (but much to our musical delight).

As "Lucky Lighter" winds things down (which Restorations fans would love), it's a slow burn. Not the energy and frenzy I assumed most of the tracks would possess. It's a gear down to drop curtains on life on the road, life missed in Jersey and most importantly, lessons they needed to learn. Just like the rest of us. The songwriting's very personable this time around and as usual, keeps their pace as engaging and as passionate as can be. It's a pretty good way to sign off. Tough to compare to the vast work they had before but then again, with such a high standard set prior, this record was always going to come with very high expectations. Thanks for the great music, guys!!!

Mixtapes: These Are Us