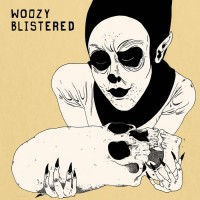 Slow-cooked to perfection over several years in the heat and humidity of New Orleans, Woozyâ€™s debut, full length album, Blistered, showcases an effort that is in no way entry-level. Irreverently indifferent towards genre pigeon-holing throughout its 41 minutes, Blistered, could be â€œsquare-peggedâ€ into shoegaze, experimental / ambient rock, post-punk, sad pop or any number of semantic-driven subgenres, but theyâ€™d still be â€œround holesâ€, incompleteâ€”the album is to be heard rather than neatly classified. Harmonious and cacophonous all at once, Kara Stafford (vocals/guitar), John St. Cyr (vocals/guitar) and Ian Paine-Jessam (percussion) create an orchestral wall of over-driven, warm and fuzzy sound; notably, there is no bass guitar, but listeners are not left wanting. For every part vocal melody, the music comes back with an equally abrasive rawness that will keep you on your toes throughout all 10 tracks.

â€œVenomâ€ is a welcoming and well-fitted introduction to the album as a whole. Energetic, with their characteristic ebb and flow of soft and hard, quiet and loud, the naming logic becomes apparent in the songâ€™s final, scathing lines, â€œtalking shit with your new best friends / that you made when you lost everything / whatâ€™s the point in having / when you are nothingâ€.

Beginning as a distortion-driven adrenaline shot to the heart, in particular contrast after the ethereal ending to â€œClouds Rush Inâ€, â€œPainted Whiteâ€ is a perfect example of Woozyâ€™s range, seamlessly transitioning from aggressive to ambient in a little over 3 minutes.

A true testament to the vocal powerhouses that are Stafford and St. Cyr, â€œGilding the Lilyâ€ is a standoutâ€”less classic duet and more conversational, the lyrics intertwine in their off-cadence, bleeding together two sides of the same story. While St. Cyr pleads: â€œI want you to know / youâ€™ll always be my homeâ€, Stafford interjects: â€œwhen California drifts into the sea / thatâ€™s when youâ€™ll find meâ€; before the songâ€™s finish their voices meld into the last lines, echoing, â€œit feels like youâ€™re all aroundâ€.

â€œThe Lurchâ€ is aptly-named, as the song itself lurches from soft and smooth to a heady guitar solo and hypnotic, cantered final verse without missing a beat. â€œAnother Way Outâ€ is a build-to-burst duet, repeating â€œand you will sleep â€˜til the days wilt / sleep â€˜til your dead / and I still wrestle with old guilt / sleep when Iâ€™m deadâ€ with increasing momentum--you may think the song will let you down gently, but itâ€™s not over â€˜til itâ€™s over, in the most pleasant, crunching way.

The final track, â€œFade Like A Sighâ€, does anything but. Heavily and experimentally percussive, the abrupt, cymbal-crash ending cannot help but be construed as ironic, a â€˜ha haâ€™ in contrast to the title. The crash snaps you back to reality and the album as a whole leaves you with the warm, bleary-eyed feeling of waking from a dream.

As stated before, Blistered carries itself with a calm and collected confidence not typical of a debut, but inherent in quality craftsmanship--if this album is any prediction of things to come, fans of Woozy can only be excited for what the future holds.