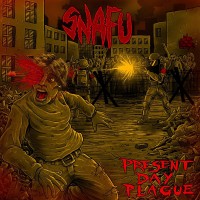 It probably wonâ€™t surprise anyone to learn that the perfect soundtrack for the apocalypse comes from Detroit. S.N.A.F.U. plays music in the tradition of bands like Discharge, Dystopia, Napalm Death, Earth Crisis, Integrity and fellow Detroiters Hellmouth. They seem convinced that the world would be a better place if the stain that is humanity was wiped from the face of the earth. They make a pretty compelling argument. Their music is an ugly combination of hardcore, anarcho-punk and noisy thrash.

Present Day Plague is S.N.A.F.U.â€™s second long player, their first being 2013â€™ Fear the Future. It may or may not be a concept album, but either way, itâ€™s as cohesive as anything youâ€™re likely to hear all year. Opener â€œSubhuman Scumâ€ and closer â€œMillions of Useless Eatersâ€ are slightly different versions of the same sample. Samples and spoken word tracks are sprinkled among the other songs, as if to move the narrative forward. They also give your ears a brief break from the musical pummeling.

â€œHer Dark Pastâ€ sets the musical tone with its angry, relentless thrash. â€œDeath Tripâ€ pushes further into death metal territory with guttural vocals and punishing double bass. â€œEternal Nocturnalâ€ features Jason Navarro (Suicide Machines, Hellmouth, Break Anchor) on guest vocals, and is probably the catchiest song on the album. â€œThe Great Deceiverâ€ is a preacher talking about the Anti-Christ. â€œThe Human Infestationâ€ may be the strangest track here. It features Child Bite singer and all around Detroit weirdo Shawn Knight in a spoken word rant. â€œBody of Sufferingâ€, â€œDead Before Dawnâ€ and â€œOne From Noneâ€ are all standouts.

Present Day Plague is best when taken as a whole. Its 18 songs and 41 minutes work together to tell a disturbing but compelling story. The one downside is that this doesnâ€™t seem to be available in any physical form. It would no doubt sound great coming from deep vinyl grooves, and the artwork would look awesome blown up too. Available at bandcamp.com (search SNAFU Detroit), often for a name your price download. This is uneasy listening at its best. Recommended music for the end of days.